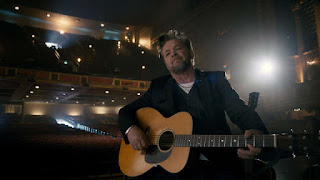 The Staton-House Band prepares for its second Denver concert. Christopher (Tanc Sade) continues to obsess over his ex-girlfriend Janine (Joy Williams), not knowing that Reg (Rafe Spall) is already romancing her behind his back. Bill (Luke Wilson) and Shelli (Carla Cugino) struggle to sustain their status quo after spontaneously having sex. Alcoholic bass player Rick (Christopher Backus) flies in his sobriety sponsor from Los Angeles: comedian Marc Maron (himself).

"Longest Days" is a bit of a surprise: it's a genuinely enjoyable and solid episode of Roadies. I watched the first episode because of its behind-the-scenes talent: Cameron Crowe, J.J. Abrams and Winnie Holzman. I kept watching because I became fixated on how so many talented people could come together to make something so ham-fisted, weakly written and incomprehensibly smug. Now I have hit the sixth episode and suddenly, possibly momentarily, everything seems to click together for a week and create something that's entertaining.

It's not perfect by any stretch. The inclusion of Marc Maron as this week's support act is painfully unfunny. While I have heard of him, I had never actively seen his material before. I really hope it is better than what he is given here. Much more successful is a brief appearance by John Mellencamp, pulled in by Wes (Colson Baker) to tutor Tom Staton's son Winston (Ethan Michael Mora) in how to play the guitar. It's also Mellencamp who provides the episode's title via one of his songs.

It was clear during last week's episode that Reg romancing Janine was something that was going to end in tears. That turned out to be an understatement. Reg persuades Janine to go and speak to Christopher, and to get closure on their troubled relationship once and for all. Bill tells Reg not to talk about Janine to Christopher, and he does. Both Bill and Shelli beg Reg not to put Christopher and Janine into the same room, and he does. When the encounter finally arrives, it is an unmitigated disaster for everybody but Janine: this is what she wanted all the time. The romance with Reg was a means to get her there, and in one overwhelming implosion of a scene she reveals that she resents Christopher, than she's writing a tell-all book to damage him, and that when they were a couple she cheated on him with Bill. The scene ends with Reg fearing for his job and heartbroken by betrayal, Christopher not speaking to Bill, Shelli angry with Bill, and Bill generally just ashamed and disappointed. I think there's more character progression in that one scene that in the rest of the series so far.

What is particularly nice is that the episode doesn't portray Janine as one-dimensionally duplicitous. She does have an affection for Reg, and in a nicely played epilogue scene we get to see them have some small level of the closure Reg tried to give her with Christopher. Kelly-Ann (Imogen Poots) also gets to turn up, to further her 'will they, won't they' status with Reg. For the first time this plot thread actually feels adult and believable, and more complex than simple misunderstandings and gossip.

This is still not must-see television by any definition, but the episode does demonstrate that there is potential in this series and these characters. In some ways that is actually more frustrating that encouraging, since it means in theory that the series could have always managed this level of quality. Now the wait begins to see if next week marks further improvement, or a disappointing return to type.
Posted by Grant at 7:44 AM