Star Trek: The Next Generation: "Ethics" 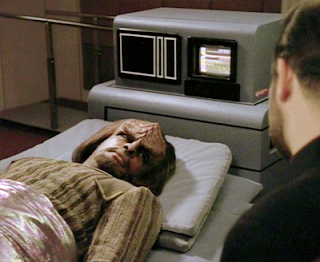 It is 2 March 1992, and time for another episode of Star Trek: The Next Generation.

Worf (Michael Dorn) is badly injured when a damaged cargo container falls on him, crushing his spine. Rather than spend the rest of his life as a paraplegic, Worf is intent upon committing ritual suicide. Hope may exist, however, in an experimental treatment offered by a Federation medical researcher - assuming Dr Crusher (Gates McFadden) allows the procedure to go ahead.

"Ethics" tackles a really complex issue for a science fiction series, so perhaps it is better to applaud its ambition than to criticise its execution. The problem with that approach is that while it is always good to see a television drama attempt to explore issues of disability, "Ethics" comes pretty close to doing every single wrong-headed thing with the concept that it can. Ambition and good intentions will only get you so far, and this episode winds up letting both its ideas and its characters down.

Let's begin with the two biggest problems. The first is the simple dramatic problem of basing the episode around Worf. He is a regular character. We know going into the episode that his spinal injury will only be temporary. Much as it would be interesting to see the series move forward with a wheelchair-bound security chief, or one with some kind of spinal implant, four-and-a-half years of experience watching the show makes it clear that this will not be a permanent or even remotely extended problem. The moment the episode begins we are essentially drumming our fingers waiting for Worf to receive a miracle cure from guest physician Dr Russell (Caroline Kava). It undercuts the drama too much.

The episode's other key problem is the manner in which Worf, faced with a lifetime of paraplegia, immediately demands help in committing ritual suicide. It is one of the most painfully unpleasant tropes in Hollywood disability narratives, one used in films such as Me Before You and Million Dollar Baby, that odiously insists that death is a better option than a disabled life. It is insulting to pretty much every disabled person in the world, since it effectively tells them that their lives are fundamentally worthless to them. Some would argue that in this case Worf's desire for suicide is justified, since he is a Klingon and they value their ability too much and consider disability to be a dishonourable state. The problems with that sort of argument are twofold: firstly, Klingons are fictional people and this pro-suicide attitude only exists because a writer decided to put in there; secondly, it's always just an excuse. People argue in favour of the suicides in Hollywood movies about this issue too, and whatever justification gets used there is still a dead disabled person at the end of the story.

Even solely in terms of Worf's characterisation it's a weak move. The last time he had an episode based around him, he was coming to terms with life as a supportive father to his son Alexander (Brian Bonsall). In this episode he immediately chooses to abandon Alexander by trying to kill himself. Michael Dorn valiantly does his best to make it work, but he's fighting a losing battle.

The episode is not entirely a write-off. A nice plot thread sees Dr Crusher grow increasingly disgusted with Dr Russell's unethical approach to medical research, and her growing intent to put her experimental treatment to use on Lt Worf - effectively growing him a new spinal cord. It is nice to see Crusher get to be so forceful and visibly affronted for a change. Jonathan Frakes also gets some solid material showing Riker's disgust at Worf's suicidal desires, and his struggle to accept and honour Klingon traditions while still finding it reprehensible. Picard (Patrick Stewart), weirdly enough, is all for Worf's plans for suicide, in a manner that Stewart sells remarkably well but which still rings somewhat hollow.

This is a bad, slightly distasteful episode, despite some solid material around its fringes. It leaves Season 5 with 11 good episodes out of 16, and a rolling quality ratio of 69 per cent.
Posted by Grant at 7:46 PM