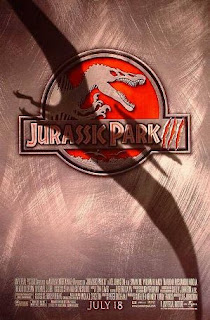 Palaeontologist Dr Alan Grant (Sam Neill) is paid to act as a guide on a fly-by of Isla Sorna, an island off the coast of Costa Rica populated by InGen's genetically engineered dinosaurs. It is a ruse: before long the plane has landed, half of the crew has been eaten, and Grant is left to help two parents (William H. Macy and Tea Leoni) find their missing son - who was last seen visiting the island with his step-father.

There are not too many ways in which one can be kind to Jurassic Park III. The plain and simple truth is that it is not a good movie. It is a sequel in the unsatisfying and tired way all mediocre sequels are: it does very much the same sorts of things as the earlier films did, only varied just a little bit and with far less enthusiasm as it does them. Occasionally a glimmer of entertainment pokes through - a scene here, a joke there - but none of it compensates for a weak storyline, cardboard cut-out characters, and some uncharacteristically weak visual effects. It took four years between films to make The Lost World and Jurassic Park III. It took Universal Pictures another 14 to return with Jurassic World. I honestly think after the third film the franchise needed a long break to reset.

Let us begin by focusing on Sam Neill's typically solid performance as Alan Grant. There is a weariness to Grant in this film that ironically matches the attitude of much of the audience. Nobody listens to him when they should. People die by not heeding his advice. When he discovers he's been had, he mutters irritably to himself before heading for the nearest beach to try and get rescued. Perhaps it's entirely a good performance, or perhaps a genuine lack of enthusiasm creeped its way in Neill's acting. Either way, it is actually pitch-perfect to where his character is in this film.

No one else is quite so lucky. William H. Macy and Tea Leoni play a separated couple in the broadest strokes possible, due to a very poor screenplay. Michael Jeter does a little better with his mercenary character, but he too suffers from the writing not giving him anything worthwhile to say or do. Alessandro Nivola gets the worst deal of the bunch, playing a co-worker of Grant's named Billy who is not only thinly drawn but oddly unlikeable.

The storyline is remarkably simple, yet lacks the little wrinkles and moments that made the original Jurassic Park so entertaining. It is just a walk across the island, with a bunch of episodic dinosaur encounters along the way. It all feels perfunctory and rushed, and a quick look at the film's background makes that clear: when successive and varied screenplays failed to work out, and Universal and Amblin refused to shift the release date, director Joe Johnston dumped all of the screenplays five weeks before the commencement of shooting and had what appeared on screen written on the fly. The script was so last-minute that shooting actually stopped for four months so that someone could write the ending. If you ever wondered why Jurassic Park III ended so abruptly, and in a scene with such poor CGI, now you know why.

There are a few beautiful moments here. The first glimpse of a pteranodon, awkwardly climbing along a steel bridge, is as good as any single shot in the whole franchise. The return of a marauding spinosaurus, a satellite phone it has eaten ringing in its stomach, is a delightful absurdity. Sam Neill's performance really is pretty great. Everything else fails. The visual effects are visibly substandard in conception and execution. The plot has no strength to it. The characters are not believable. The sense of wonder in Jurassic Park is gone. The dark, edgy tension of The Lost World is gone. To be honest there is not a lot left.
Posted by Grant at 5:03 PM