Colditz: "Gone Away, Part I" 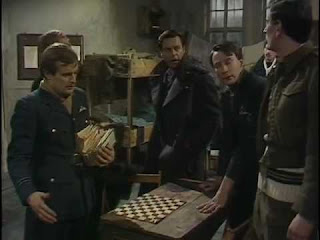 When an opportunity suddenly presents itself, Carter (David McCallum) makes a spontaneous escape attempt. While his attempt fails, and results in a broken ankle as well as solitary confinement, the intelligence he gains in the process makes a previously dismissed escape strategy the British contigent's best chance ever to get out of Colditz.

"Gone Away" is a two-part finale to Colditz's first season, and brings with it a suitably climactic storyline. In many ways it feels like a culmination: after several failed escape attempts over the course of the year, this final opportunity allows four characters to break out of Colditz at the same time - at least they will if their plans are not foiled by the increasingly suspicious Hauptmann Ulmann (Hans Meyer).

There's a clever misdirection at the episode's beginning. One strategy has been refused by escape officer Pat Grant (Edward Hardwicke), because it simply relies on too many unknown factors. Instead Ulmann's insistence that the British prisoners tidy up their quarters leads to Carter getting hidden inside a tea chest and transported into the attic of the German guardhouse. From there it looks as if we're going to get an episode all about Carter trying to flee the castle, but within minutes he has miscalculated, slipped from a wall and broken his ankle.

The things that Carter sees on his way out, however, finally fill in enough of the gaps in the earlier plan to make it a genuine option. At the same time Grant is tiring of the officers' objections to the way he authorises escape attempts, and requests that he be relieved of the job. Not only does Colonel Preston (Jack Hedley) agree, he tells Grant to join this new escape attempt as one of the four escapees. We entered the season with Grant, and now we get to leave it with him as well.

Since two episodes have been allocated to the attempt, this first part is given plenty of room to develop the strategy and introduce the viewer to precisely what will happen. When the attempt finally begins at the end of the episode, it works as a fine cliffhanger; given all of the tense preparations made, the following episode automatically becomes a must-see.

Edward Hardwicke is particularly great in this episode, and does a great job of showcasing Grant's growing frustration and despondency. Captivity has worn on him, and he's visibly sick of constantly turning down half-baked escape plans and frustrating his fellow officers in the process. The episode also pairs him in the escape with Phil Carrington (Robert Wagner). The two characters - and the actors playing them - share a great chemistry.

This episode is less of a drama and more of a procedural thriller. Structurally it is like the first half of a great heist movie: the team is assembled, the plan is developed, and it is all set to be sprung into action. The season finale cannot be watched fast enough.
Posted by Grant at 5:13 PM