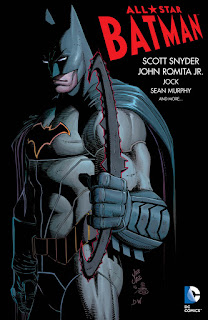 Immediately prior to their launch of the New 52, one of DC Comics' best titles was Detective Comics, under the control of writer Scott Snyder. When the New 52 hit he shifted over to Batman, telling a string of high concept 'blockbuster' story arcs that not only made it DC's best-selling book but also managed to sell in excess of 100,000 copies per issue for its entire 52-issue run. With the launch of DC Rebirth, Snyder announced his retirement from Batman, handing the reins over to new writer Tom King.

You would think after more than five years writing for the character that Snyder would be a little tired of Batman, yet here is at the helm of a relaunched All-Star Batman. The title was previously used for Frank Miller and Jim Lee's incomplete alternative take on the character. Here it is used to team Snyder up with a string of high-profile artists for a limited series of story arcs. The first, featuring art by industry stalwart John Romita Jr, sees Batman taking Two-Face out of Gotham on an as-yet unexplained road trip - with every mercenary, assassin and super-villain in America hot on their trail.

It is a stunning first issue, packed with action and character, and utilising a clever non-linear narrative to slowly reveal the story as the issue goes on. Snyder's writing a different kind of Batman as well, and he is backed up with a different kind of sidekick: We Are Robin star Duke Thomas, now wearing a fresh superhero suit but as yet without a superhero name. This is top-notch Snyder at work here, opening a mystery but giving plenty of story at the same time. Romita's artwork keeps everything fresh and distinctive, with a great new look for Two-Face and a great sense of motion and action throughout. If you're a Batman fan, this book looks set to be a must-have. A short back-up serial adds more background to Duke's new partnership with the Dark Knight, as they investigation a grisly murder. It's a nice change of style, with art by Declan Shalvey, and helps justify the book's slightly higher price tag (US$4.99). DC readers be aware: this is one hell of a great comic. (5/5)

Under the cut: reviews of Action Comics, Detective Comics and New Super-Man.

The action scene that simply won't end continues to not end. I am actually losing track on how many issues this fight between Superman and Doomsday has been going for; I think we may be into the fifth issue, and while there are some nicely illustrated action beats going on, that's still about 100 pages dedicated to super-powered aliens punching each other across America. Segovia and Thibert's art is good, and well coloured by Prianto, but Dan Jurgens needs to bring more than character cameos (hello Superwoman) and fistcuffs to sustain the reader's interest much longer. (3/5)

This issue opens with a great prologue with art by Al Barrionuevo and Adriano Lucas, which should grab the attention of any of Batwoman's old readers. After that it's right into the thick of the action, as Batman and Batwoman's new super-team take on Jacob Kane and his army of Batman-inspired soldiers. While this team storyline had a slightly wobbly opening, it has developed into an exceptional one. Every character gets their moment to shine. Each of them has a part to play - even Clayface, whose presence I initially questioned the most. It is so good to see DC firing on all cylinders on so many of their titles. (5/5)

I really want to like New Super-Man. I think the concept of a Chinese superhero is a great one, with enormous potential. I want the DC Universe to step outside of the USA as often as it can. Sadly this book continues to make liking it difficult. Kong Kenan is an actively unlikeable protagonist, and while DC has found success with arrogant fools before - Guy Gardner remains a fan favourite - here there's little to mitigate or balance his negative character traits. Yang is writing the book with a strong thread of humour running through it, so if you were a fan of Justice League 3000 you'll find a similar tone here. For me, this book simply is not working. (2/5)
Posted by Grant at 5:04 PM