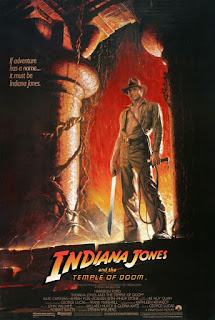 After escaping from a Chinese gangster in Shanghai, archaeologist Dr Indiana Jones (Harrison Ford) makes a crash-landing into India. There he finds a remote village whose sacred stone has been taken and their children kidnapped en masse. With kid sidekick Short Round (Ke Huey Quan) and lounge singer Willie Scott (Kate Capshaw) in tow, Indy investigates a nearby palace and the diabolical 'temple of doom' beneath it.

Indiana Jones and the Temple of Doom was the second Indiana Jones film, released four years after Raiders of the Lost Ark in 1984. It has generally been regarded as the weakest of the original three films. with many viewers disliking the misplaced combination of slapstick comedy and horror, the introduction of a child sidekick, and the gratingly irritating romantic lead Willie Scott. Generally speaking the mass opinions are correct: quality-wise Temple of Doom sits a solid distance down the heap from either Raiders or The Last Crusade, and debates over whether Temple of Doom is better or worse than late series entry Kingdom of the Crystal Skull probably don't really have a viable conclusion to them. This is one hell of a creative misjudgement. That said, this is not a complete disaster of a film but more of a curate's egg. There is a lot of good material in Temple of Doom, generally buried into the back half where most of the audience has already written the movie off.

So let us break it down: basically there are two major problems with Temple of Doom that really come close to ruining it completely. The first is the problem of tone and structure: Raiders of the Lost Ark worked so successfully because it was a fast-paced, funny action film that punctuated the narrative with action and chase scenes every few minutes. It deliberately echoes those 1930s movie serials, and it does so to great effect. Temple of Doom does not do that: after the initial action of the prologue it settles down to a relatively slow build of the plot for the entire first half of the movie. It is only at the midway point, when Indy, Willie and Short Round creep into the titular temple, that the film picks up and returns to the regular action style of the franchise. Structurally it is less like an Indiana Jones film and more like Jurassic Park: only the slow rise up to the top of the roller coaster is much less interesting or funny.

The tone is probably the larger problem. Temple of Doom is not simply a darker picture than Raiders, it is oddly mean and remarkably nasty. People are burned to death in pits of lava, or have their hearts pulled out of their chests, or get strangled to death in whip-meets-fan accidents. Indy himself is tortured and forced to drink mind-controlling liquids. Short Round - a small Chinese boy - is variously punched, slapped, whipped and stabbed. I am an unashamed fan of Short Round, by the way: I think he is flat-out great, and one of Temple of Doom's greatest assets. In fact I am such a fan of the character that I once wrote an entire blog post defending his existence. That love aside, I don't think any child character has been physically abused in a Hollywood blockbuster either before or since (although Tim in Jurassic Park comes mightily close). There has been an attempt in the film to contrast the bleak cruelty with some comedy, but it is generally comedy presented as slapstick - the number of comedic sound effects in the movie boggles the mind - or focuses on the film's biggest character liability: Willie Scott.

Most people who have seen Raiders would agree that one of its best elements is Marion Ravenwood (Karen Allen), Indy's strong-willed and pro-active ex-girlfriend. She gets many of the best lines, she gets to actively contribute to the narrative, and Allen and Ford share a wonderful on-screen chemistry. Her replacement here does none of those things. Willie is weak-minded and vain, almost purposefully stupid, and it seems as if she contributes more screams to the film than solid lines of dialogue. Kate Capshaw lacks chemistry with Ford, although it is not the fault of either actor but of a screenplay that refuses to allow that chemistry to take place. I feel deeply sorry for Capshaw, who accepted the role in the belief she was playing someone similar to Marion. 'The Jar-Jar Binks of Indiana Jones' is a mean description, but to be honest it is also pretty accurate.

The other big issue that hangs over Temple of Doom is racism. Put simply, it is a remarkably racist film. By indulging in the adventure films of the 1930s it has inadvertently brought over a lot of attitudes from that period towards race. As a result Indy's experience of India is one of superstitious villagers, mad bloodthirsty cultists and weird unpleasant food stuffs. Perhaps most egregiously the film makes a mockery of the Hindu religion, recasting Kali not as a goddess of change, destruction and creation but as a crude analogue for devil worship. There is also the considerable problem - a seemingly perennial one in Hollywood - of the educated white man stepping in to save the foreign primitives from themselves.

John Williams' musical score does not help matters much, with accentuated Indian motifs for scenes set in India, and stereotypical Chinese music for scenes in Shanghai. It is an oddly mediocre score by Williams' standards - still packed with well composed scenes, but a little too brash and overpowering throughout the film. It is still possible to watch the film despite the racist overtones, but it is impossible to watch it without being aware of what a problematic film it is.

George Lucas trades in homage and tribute. His Star Wars films crib liberally and openly from Buck Rogers, Flash Gordon, Akira Kurosawa and a whole host of other films, genres and texts. Raiders of the Lost Ark did something similar, riffing from a range of old adventure movies from its set period. The Temple of Doom goes a step further, resembling George Stevens' 1939 adventure film Gunga Din so closely in places that it arguably crosses the line from homage to unofficial remake. The villainous Thuggee cult exists in both, as does their underground temple, the colonial India setting, the perilous rope bridge and many other elements. I appreciate the remix nature of Lucas' film works, and indeed think he has a genuine gift for distilling common themes into crowd-pleasing combinations. I also think he and Spielberg crossed the line with The Temple of Doom.

It is not all bad. Harrison Ford gives a good performance here, playing Jones a little younger and little meaner. The film is set in 1935, prior to the events of Raiders of the Lost Ark, and as a result we see an Indy who is relatively self-centred and mercenary in the way he goes about his business. There is a key moment at the film's halfway point: he has infiltrated the temple, and stolen the three glowing sacred stones that were stolen. He is only after them for their monetary worth, and he is effectively home free. Then he hears a child's cries, and after a pained moment's hesitation goes to investigate. The more moral character of Raiders is effectively born on-screen.

Amrish Puri is great as cult leader Mola Ram. He plays the role as pure unadulterated evil, showing no hesitation at killing, torturing or using children as slave labour to further his schemes. Ram is a deliberately superficial kind of villain, but given the context of the film around him he is pitch-perfect. After Raiders of the Lost Ark's magnificent Rene Belloq, Mola Ram is pretty much the most entertaining villain the Indiana Jones series has had.

Douglas Slocombe's photography is brilliant. Shot by shot the film looks remarkable, with some beautiful framings and a great sense of richness, contrast and colour. I think in many respects Temple of Doom is the best-looking film of the four. The film's visual aesthetic also helps to create some really enjoyable action sequences during the film's climax. The rescue of the children from the mine kicks things off, followed by a carnival ride-styled mine cart chase, and finally hitting a peak in the wonderfully iconic fight on a collapse rope bridge. Is it enough to save the movie? Possibly not, but this lengthy string of chases and fist-fights certainly help to salvage the wreckage.

Indiana Jones and the Temple of Doom was produced at a pretty dark time for its creators. George Lucas was in the middle of a costly divorce, Spielberg was separating from a girlfriend, and the shadow of potential criminal charges hung over Spielberg due to the accidental killing of Vic Morrow and two children during the production of The Twilight Zone: The Movie, which Spielberg had produced. Many seem to feel that it was the troubled personal lives of its creators that led to Temple of Doom being so uncharacteristically dark and gruesome. While that may be possible, I actually think it was simply a flawed creative process: Lucas had allowed his Star Wars sequel The Empire Strikes Back to become a darker kind of story to widespread acclaim, and the temptation must have been there to attempt the same process with Indiana Jones. I also think there was a hurried attempt in production to pull back from that dark material with all of the discordant attempts at humour. Instead of fixing a problematic movie it seems to have simply made things worse. There is some good in Temple of Doom, but it is outnumbered and overwhelmed. This is, for me, the low point of the series.
Posted by Grant at 5:11 PM