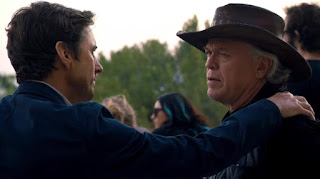 It's 21 August 2016, and time for the penultimate episode of Roadies.

Much to the road crew's chagrin, the Staton-House Band has been booked to play a corporate function for a rich rubber magnate. Shelli (Carla Gugino) returns just it time to get an unexpected offer from Tom Staton (Catero Alain Colbert). Kelly-Ann (Imogen Poots) ponders her life choices after receiving a hard drive of her teenage writing. Reg (Rafe Spall) continues to obsess over his own future, and the fate of the band.

It is frustrating when a television drama fails to come together. I think it is even more frustrating when a television drama does come together, but it does so too late. These last two episodes of Roadies have seen the series finally work out its rhythms and characters, but of course by now it is almost certainly too late for an audience to find it. Showtime have yet to make a formal announcement on the series' future, but for it to receive a second year at this stage - and with declining viewing figures - would be a big surprise.

It has taken me nine episodes to finally realise of what it is that Roadies reminds me: Aaron Sorkin's Studio 60 on the Sunset Strip. Like Roadies, that was a widely anticipated TV drama from a major and acclaimed creative talent that combined a behind-the-scenes look at the entertainment industry with character drama, lighthearted moments, and regular cameo performances by real-life musicians and pop groups. Both series also share many of the same flaws and faults: a general sense of self-importance, a penchant for easy and predictable character arcs, and a last-minute improvement in quality that came too late to save the show. Personally I found Studio 60 a lot more enjoyable from the outset, but the similarities are there and I think they're remarkably strong.

There is an interesting conversation in the middle of this episode, in which Kelly-Ann starts flirting with a roadie from another artist at a bar. The flirting soon descends into a small argument, since Kelly-Ann despises the idea of 'selling out' to a corporate gig while the young man thinks that corporate-owned alternative music is simply a fact of life and denying it is naive. It is an argument that the show has been having all season, albeit fairly unsuccessfully in most episodes, but it is interesting to see it come to a head here. It ties in with a lot of the stuff going on this episode. There are basically three kinds of people presented here. The artists themselves are one. The second is the likes of Bill (Luke Wilson) and Phil (Ron White), whose lives have been spent enabling the artists to create and showcase their work. "I bring comfort to genius," argues Bill in one particularly insightful moment. Then there is the third kind of person: the consumer. Whether it is rubber magnate Jack Peltz (Steve Zissis), who uses his annual company summit to essentially buy access to his favourite bands, or groupie Natalie (Jacqueline Byers), who this week gets dumped by band member Rick (Christopher Backus), they are a slightly bleak end to the equation where all of the music simply hits a black hole and gets commodified by the market. The question of where the music goes, and the legitimacy of those who simply consume the music versus those who soak themselves in its mystique, is an interesting angle for the series to take. It's a shame it failed to clarify the issues a bit more neatly and a few weeks earlier.

There is plenty of decent material in this episode, including Reg and Kelly-Ann finally scoring a romantic moment that is both emotionally effective and narratively earned, an unexpected and quite sad rift in the band itself, and a nice minor thread between Milo (Peter Cambor) and a woman hired as service staff for the gig (Jen Tullock). It all winds up with a genuinely shocking cliffhanger moment that is clearly going to dominate the tenth and final episode this week.

These past two episodes of Roadies get my wholehearted recommendation. The series premise always had a lot of promise, and while this sudden upswing in quality is great to see it does come saddled with the regret that it came so late in the day. I am suddenly finding myself in the unexpected position of not wanting to see the series end. At this stage it actually deserves a second season to right the ship and do things properly.
Posted by Grant at 5:09 PM