Star Trek: The Next Generation: "The Outcast" 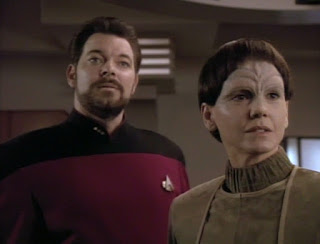 It is 16 March 1992, and time for another episode of Star Trek: The Next Generation.

The Enterprise comes to the aid of the androgynous J'Naii, who have lost a shuttlecraft inside a previously theoretical area of space known as 'null space'. While Commander Riker (Jonathan Frakes) works with the J'Naii technician Soren (Melinda Culea), the begins to share a romance - once expressly forbidden by the customs of Soren's people.

Star Trek: The Next Generation executive producer Rick Berman once said: 'We thought we had made a very positive statement about sexual prejudice in a distinctively Star Trek way, but we still got letters from those who thought it was just our way of "washing our hands" of the homosexual situation.' Let's have a look into why the Next Generation production team might have received those letters.

Star Trek had, historically speaking, been pretty progressive in the ways it tackled contemporary social issues via science fiction allegory. Several key episodes of the original series - not to mention a few in The Next Generation - had actively tackled issues of race, ethnicity and bigotry. Other episodes had focused obliquely on environmental issues. By the early 1990s the one 'final frontier' remaining for Star Trek and social commentary appeared to be issues of sexual diversity. The Star Trek universe remained obstinately hetero-normative, much to the growing chagrin of LGBTI and allied viewers who were impatiently drumming their fingers waiting for Star Trek to acknowledge their existence.

"The Outcast" was seen from the outset as an attempt to redress that imbalance. It presents an alien civilization, the J'Naii, where gender and sexuality differences are shunned and rendered illegal, and anyone stepping outside of the accepted cultural norm is taken away and medically 'adjusted' to fall in line with the majority. An Enterprise crew member falls in love with one of these rare gendered J'Naii, and so a conflict is generated. On paper it's a reasonable enough premise. In action it all falls apart in pretty terrible ways.

The episode presents the J'Naii as androgynous, however they are uniformly cast with women. Attempts to render them sexless via short haircuts and bumpy foreheads simply do not achieve the desired effect. The practical result of how they are represented is, to be completely honest, as a stereotypical image of lesbians. Soren, who becomes attracted to Riker, is an atypical J'Naii because she actively presents herself as female - or, in practical terms, as feminine. Her heterosexual attraction to Riker is therefore seen as deviant and unwholesome by her own people.

Let's think on this set-up for a moment: in trying to finally tell a story about sexual diversity, The Next Generation effectively creates a planet of lesbians within which heterosexuals are an oppressed minority. It is essentially an episode about queerness in which heterosexuality is made the centre of attention. The episode ultimately does the polar opposite of what it has been constructed to do. It would almost be hilarious were it not for the fact that the episode ends and the LGBTI community still has never received any proper representation in the Star Trek universe. An openly gay character does not properly turn up until Star Trek Beyond, 24 years later.

Part of the problem with the episode is the choice of Riker as a romantic partner in the story. He is aggressively heterosexual, and therefore his presence simply pushes the J'Naii and Soren even harder towards a female identity. Jonathan Frakes may do his damnedest to sell the concept, but he's fighting a losing battle; Riker is quite literally the least appropriate member of the regular cast with which to undertake this storyline.

To make matters worse, the episode engages in some weird retrograde 'battle of the sexes', in which Dr Crusher (Gates McFadden) awkwardly explains to Soren how women used to be treated by men in human society, and in which Worf (Michael Dorn) gets to engage in bizarrely unlikeable men's rights activism over a poker game. When it becomes clear that Soren's rights are going to be completely and irrevocably violated, Riker wants to go and rescue her and give her asylum on the Enteprise, but Picard (Patrick Stewart) weirdly insists upon not interfering. It's not as if the J'Naii are a comparatively primitive culture where the Prime Directive would apply - Picard simply doesn't think saving an innocent woman from being forcibly violated is a good idea. The extent to which the episode throws its own characters under a bus to aid some misguided social commentary is staggering.

One sad thing in all of this is that both Jonathan Frakes and Melinda Culea really do some great acting here, but in the end it all feels so grossly distasteful that there was frankly no point in them turning up for work at all. The script lets them down as badly as it lets down the audience. This is a deeply unpleasant episode, despite visibly good intentions. It leaves Season 5 with 11 good episodes out of 17, and a quality ratio that had slid down to 65 per cent.

It is worth highlighting Lt La Forge's weird beard in this episode. LeVar Burton only has one scene, inside the Enterprise shuttle bay, but without explanation he's boasting a full beard that he did not have in his last episode and which he does not have in his next. It is his unexplained, slightly jarring single-scene beard.
Posted by Grant at 1:09 PM