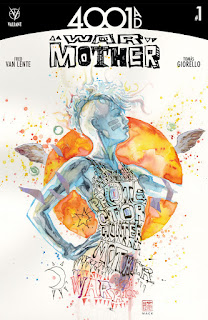 The 4001 AD miniseries has not only been a critical smash for Valiant, it has also enabled them to expand their roster of characters. This special one-shot by Fred Van Lente and Tomas Giorello introduces War Mother. When a huge piece of technology crashes out of orbit, the scavenger community known as the Grove sends out War Mother to collect anything of value.

This is a wonderful blend of 2000 AD and Metal Hurlant, with some absolutely great art and design by Giorello. If you are looking for a pretty comic book for the week, this is a fine contender. It is also pretty much self-contained. Anybody reading 4001 AD can see where things fit in, but knowing that background information is absolutely no requirement to enjoying the comic.

Van Lente tells a brisk and action-packed story of rival salvagers and mutated deadly creatures. It is clearly a set-up for an ongoing series, but based on the entertaining story and beautiful artwork I'm pretty happy to see that happen. This one-shot is your opportunity to get in on the ground floor. (4/5)

An issue for story development more than action. After the destruction of a US naval vessel, Aquaman voluntarily goes into American custody until the situation can be sorted out. That may be difficult, as trigger-happy Americans and Atlanteans alike push the two nations closer to war, and Mera loses patience waiting for an outcome. This storyline is shaping into a nice superhero political thriller, which is also tying in nicely to the past few years of Aquaman back story. Abnett's script is rock-solid, and Philippe Briones' artwork is getting better each issue. (4/5)

I have not been sold on King and Finch's first story arc on Batman, as Batman takes a pair of idealistic superheroes under his wing - with what now seem like disastrous consequences. This issue pushes the story along, revealing who the real enemy is and why new hero Gotham has seemingly lost control. I am not a huge fan of Hugo Strange or Psycho Pirate, but together they are an intriguing combination - particularly Psycho Pirate, who is traditionally a Justice League villain. It's still not a brilliant book, but it's becoming more enjoyable. (3/5)

This is a great superhero comic. Benjamin Percy is positively nailing his portrayal of Oliver Queen, dragging the book back to the territory where it always worked the best. It also boasts a great new villainous organisation: the Ninth Circle, a demonic bank for super-villains. That is a staggeringly great idea, and I really hope they stick around in the DC Universe for a while.Juan Ferreyra's artwork and colours are richly presented and very readable. This issue has pretty much sealed the deal: this is my favourite book for DC Rebirth. If you like superhero books you should definitely check it out. (5/5)
Posted by Grant at 7:48 AM