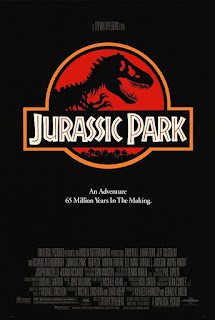 Palaeontologist Alan Grant (Sam Neill), palaeobotanist Ellie Satler (Laura Dern) and self-proclaimed chaotician Ian Malcolm (Jeff Goldbum) are invited by billionaire John Hammond (Richard Attenborough) to inspect his brand-new theme park. Jurassic Park is a state-of-the-art wildlife reserve on a small island off the coast of Costa Rica. The wildlife is genetically engineered dinosaurs, recreated through dna manipulation, and they have just broken out of their cages.

It was impossible to avoid Jurassic Park back in 1993. It was the biggest film of the year; indeed at the time it was the biggest film of all time, at least unadjusted for inflation. Pretty much everybody in the developed world saw it. Many went and saw it multiple times. Its combination of dinosaurs, action and thrills made it a huge popular hit, and its ground-breaking use of computer-generated images (CGI) made it a watershed in Hollywood filmmaking.

It has now been 23 years since it was first released, so it seemed high time to take a fresh look and see how 1993's biggest movie blockbuster was standing the test of time.

The short answer is 'very, very well'. Jurassic Park is a theme park ride about a theme park. It is divided pretty neatly into two hours. The first hour is the slow, measured climb up to the top of the roller coaster: the setting is introduced, the characters enter into the scene, and an array of plot complications and twists are carefully set up. The second hour is the roller coaster ride itself: because the film has spent so much time preparing the story, it is essentially a 60 minute climax from a rain-soaked confrontation with an angry Tyrannosaurus Rex to a final escape from the island by helicopter.

Steven Spielberg is a great director, but a few of his films stand out above his own high standard as genuine master works: Jaws, Raiders of the Lost Ark, Schindler's List. I firmly believe Jurassic Park belongs on that list. It is one of the most effectively made and entertaining action movies ever produced. Part of what makes the film so effective is how streamlined its plot is. There are complications, certainly, but it basically boils down to two parallel threads. In one, Hammond, Satler and keeper Muldoon (the late, much missed Bob Peck) work to restore power to the electrified fences and keep the animals contained, after an act of industrial espionage leaves the wide open. In the other Grant and Hammond's two grandchildren Tim and Lex have to make their way across several miles of open, dinosaur-infested park to get back to the visitor's centre. There are complications along the way, sure, but when you strip the detail off it is a brilliantly streamlined narrative.

The characters are all well developed, and excellently brought to life by their respective actors. Neill and Dern make for great leads: they are smart, sensible people saying and doing smart, sensible things. I have wondered for some time why other SF cinema characters like Ellen Ripley and Sarah Connor have emerged as feminist icons yet Ellie Satler remains largely unacknowledged.

Ian Malcolm is a strange little outlier. As written the character is horrendously obnoxious and unlikeable. As performed by Jeff Goldblum he is funny and engaging. In Michael Crichton's original novel Malcolm dies. When Crichton wrote the sequel he retroactively declared Malcolm had lived, so that he could become the protagonist in The Lost World. One wonders to what degree Goldbum's portrayal had a hand in changing Crichton's mind.

The supporting cast are generally very strong, without any weak links to let the film down. The juvenile performers are both excellent, which is typical of a Spielberg production: directing children to give outstanding performances seems to be one of his key talents. While we are on the subject: Spielberg has a weird reputation for making sweet, deeply saccharine films about kids. I have always worked on the assumption that people who believe that reputation have simply never seen his films. Whether it is Elliot in E.T. nearly dying and having his home invaded by the US government, or Short Round in Indiana Jones and the Temple of Doom getting thrown out of a plane, sent to work in the mines and violently whipped, or even Jim in Empire of the Sun surviving a Japanese invasion and internment, it seems to me that in a Spielberg film the children often have the worst time of all.

Take Tim (Joseph Mazello). During the course of this film he is threatened by a T-Rex, trapped inside a crushed car that is then hurled over a cliffside into a tree, electrocuted on a high voltage security fence, dies, is resurrected via CPR, gets chased around the visitor's centre by velociraptors and is almost crushed to death under a collapsing fossil display. None of this is played for laughs: while trapped in a jeep that's getting crushed by a T-Rex, both he and his sister Lex are visibly screaming in terror with tears running down their faces. Spielberg is never sentimental with his child characters - if anything he's actively cruel to them.

The defining element of Jurassic Park is, of course, its dinosaurs. The film remains a marvel of visual effects, because the technology used to bring the animals to life varies so much from shot to shot. In some they are computer-generated characters. In others they are elaborate hydraulic puppets. Occasionally they are even actors in suits, Godzilla-style. Because the technology keeps changing, and because they are shot so effectively, they stop being impressive visual effects and simply look like animals in a real place. There are few effects-driven films whose visuals have aged so well.

With the dinosaurs comes a remarkable sense of wonder. Nearly every child gets excited by dinosaurs at some point, and I think most of us keep an element of that excitement somewhere inside. When Grant and Satler first see the brachiosauruses, we cannot help but get a little bit swept away with them. When a herd of gallimimuses come running up a grassy hill, its difficult to be unswayed by the excitement. When the T-Rex slowly stalks through a broken fence between two jeeps, roaring in the rain, it is still one of the most exciting and dramatic single moments in movie history. Jurassic Park taps into something very strong and personal in its viewers, and it drags them on a thrilling theme park ride. It is funny, it gets a little scary, and it challenges us to be awed. It may be 23 years old, but it is still one of the best Summer blockbusters ever devised.