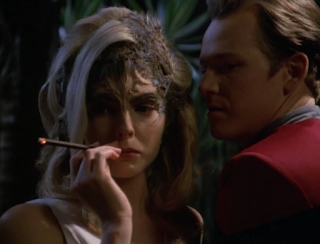 It is 27 February 1995, and time for another episode of Star Trek: Voyager.

Voyager returns to collect Paris (Robert Duncan McNeill) and Kim (Garrett Wang) from a planetary mission, only to discover Paris has been convicted of murder. His punishment: to have the final memories of his victim implanted into his brain, and to re-live them every few hours for the rest of his life. As the implanted memories begin to threat Paris' life, Lt Tuvok (Tim Russ) re-opens the case to prove his crewmate's innocence.

Sometimes you really have to wonder what went on in the Star Trek: Voyager writer's room. 'Here's an idea,' said one writer, 'how about we made one of those really stereotypical old-fashioned murder-mysteries, only instead of a trenchcoat-wearing detective we have a Vulcan chief of security, and instead of human film noir stereotypes we have bird-people film noir stereotypes?' I imagine at that point everybody in the room high-fived, laughed at their amazing ideas, and popped out for lunch. I also wonder if there was a point during the production of the episode when any of the writers and producers involved suddenly had a moment of clarity, falling to their knees screaming 'Oh God what have we done?' Serious, "Ex Post Facto" is that stupid an episode.

There is merit in a murder mystery as a starting point for a Star Trek episode. Indeed there have been several produced over the course of the various franchise iterations. The core problem with "Ex Post Facto" is that it does not use it as a starting point but as a template. The hard-boiled crime tropes come thick and fast: the story is recounted in a series of flashbacks recounted by the various suspects, in some scenes actually in black and white. Paris, as the foolish protagonist of a noir fiction, falls completely for the sultry femme fatale - she even smokes a cigarette like her stereotypical 1940s counterparts. By the episode's end Tuvok even gathers the various suspects in a room together to explain the murder and reveal the culprit, as if it is an Agatha Christie novel.

Not only does the tone fail to match the series, it is not even a particularly interesting or clever mystery. Worse still, the focus on a crude mystery format leads the episode to disregard other, more interesting aspects of the set-up. Paris' punishment for murder is to have his apparent victim's final moments implanted in his own memory, where they will automatically replay in his mind every few hours. While a little time is spent on how invasive and cruel this procedure is, and how it is going to cause permanent damage to Paris' mind, it feels as if a lot more material has been left by the wayside.

Design-wise the episode is cheap and rather embarrassing looking. The aliens of the week have strange feathered head coverings that could be weird hoods, or could actually be feathers - at no point did I completely work out which was the case. The acting is generally of a weak standard, I suspect in the main because the screenplay forced B-movie level performances out of everybody. It is without exaggeration a chore to complete; simply dreadful television on almost every level.

To add insult to injury, it is not even remotely original rubbish: The Next Generation undertook almost exactly the same plot years earlier, only in that case it was Commander Riker who had been accused of seducing a scientist's wife and then committing murder. I did not enjoy that episode either, but at least that one tried something out of the ordinary (in that case, copying Rashomon).

Seven episodes into Voyager's first season, and only three episodes have been good. The quality ratio drops to 43 per cent.
Posted by Grant at 7:44 AM