Colditz: "Gone Away Part II: With the Wild Geese" 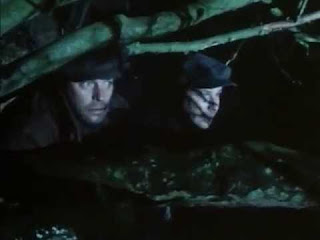 It is 25 January 1973, and time for the first season finale of Colditz.

Colditz effectively comes full circle: it started outside of the castle, with officers sneaking their way desperately across enemy territory. This first season finishes that way too, with Grant and Carrington doing their best to masquerade as Flemish construction workers as they edge ever-closer to the Swiss border. It is a tense, wonderfully dramatic and hugely entertaining finale.

As with much of Colditz, the episode is loosely based on real-life events. The character of Pat Grant is based on Pat Reid, upon whose memoir the series is based, and the episode tracks a very similar escape attempt that Reid himself undertook - albeit via a different route into Switzerland. Knowing that so much the series is inspired by real events actually makes the more outlandish and difficult-to-swallow moments easier to believe. Actual people did the things shown on screen - it is utterly remarkable to watch the series knowing that fact.

The episode's early minutes cover the second half of the escape from Colditz, which is in itself a remarkable tense affair. Once free, the two pairs of officers split up and we only focus on Grant and Carrington for the rest of the episode. It is a beautifully written and directed thriller (script by John Brason, direction by Peter Cregeen), since every random meeting on the street could see the men found out. Every unwanted conversation with a German soldier on the road could end in their arrest or execution. The episode refuses to slow down or let up.

The episode reaches an insanely tense climax as Grant and Carrington encounter a random German out for a walk in the snow. The man realises they aren't German and runs for help. Grant and Carrington have no option but to charge into the snow and hope they can reach the border before German soldiers catch up with them.

It is a clever creative move to pair Grant up with Carrington: one British and one American, their differing personalities make them probably the most entertaining match out of all the regular characters. It is a great choice to focus on Grant in particular, since we entered the season with him and now exit it in a very similar fashion. Edward Hardwicke's dogged, low-key performance has been one of the highlights of Colditz, and he is an incredibly easy character to like and root for.

Colditz's first season has been absolutely stunning, combining strong performances and well-researched script to create a very realistic, varied and emotionally effective story. The subtlety of the series has been remarkable, as has its nuanced representation of both the allied prisoners and the German guards. It is held up as one of the BBC's all-time great drama series for a damned good reason, and despite the budgetary limitations of all classic British TV it has held up enormously well today, more than 40 years after its original broadcast.
Posted by Grant at 5:06 PM