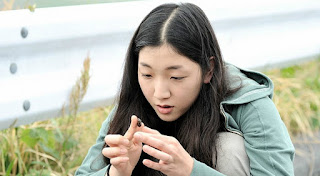 15 years ago, four schoolgirls watched their friend get taken away and murdered by an anonymous killer. Today one of those girls, Akiko (Sakura Ando), is a 'shut in'. She still lives with her parents. She does not have a job. She spends most of her life safe in her bedroom, reading manga and playing videogames. When her brother Koji (Ryo Kase) returns home after years away in Tokyo, Akiko is over-joyed. Then she begins to suspect that something has gone terribly wrong with her brother, and begins to suspect he is abusing his young step-daughter.

Another episode means another change in protagonist, as this five-part Japanese miniseries works its way through the four schoolgirls one by one. It makes for an odd series in many respects: after the assault and murder of a girl back in the first episode I wanted to see the killer tracked down and the open wound resolved, but in fact open wounds are all that Penance deals in. It is effectively an anthology series. A terrible thing has happened, and the series jumps forward 15 years to showcase the various ruined lives it left in its wake.

Akiko seems particularly broken by the events of her childhood. She started the day in an uncharacteristically pretty dress. When she ran to tell Asako (Kyoko Koizumi) that her daughter has been killed, Asako first disbelieves her and subsequently shoves her out of the way, sending her flying to the ground. By the time Akiko's brother Koji finds her that night, her new dress is soaked from a bleeding nose and Akiko has connected the one to the other: try and dress outside of her low, slovenly station, and bad things happen as punishment.

Jump forward 15 years and Akiko hides away in her bedroom. She doesn't have a job. She doesn't have skills. She is barely capable of holding a sensible conversation. She dresses in tracksuit pants and hooded sweatshirts. The only person to whom she seems close is Koji, and he doesn't live at home any more. When he suddenly returns with a new girlfriend and a step-daughter, it lifts Akiko up. She connects with particular enthusiasm with Koji's stepdaughter Wakaba (Nanaka Fujii), since - as someone who has never really graduated from childhood - Akiko can connect with her much more easily.

Sakura Ando delivers a great performance here. It is all bottled up and awkward, and tragically childlike. Watching her slowly open up opposite Wakaba is close to heart-warming - an odd experience in a series this bleak - and then inevitably it all begins to start crashing down. Wakaba's mother buys Akiko some nice clothes, and persuades her to try them on. Soon afterwards Akiko begins to notice worrying behaviour between her brother and Wakaba. The episode darkens quickly. Before long it has twisted down to a paranoid mess as Akiko vascillates between a desire to save Wakaba from Koji and simply hiding safely in her room.

The most challenging part of the episode is that it is so ambiguous. It looks an awful lot like abuse is occurring, but director Kiyoshi Kurosawa refuses to tell us for certain. It leaves us wondering: has Akiko done a terrible thing for a good purpose, or has she simply destroyed a family because of her own mental illness. No easy solutions here: just a dark, unsettling close to credits.
Posted by Grant at 3:57 PM