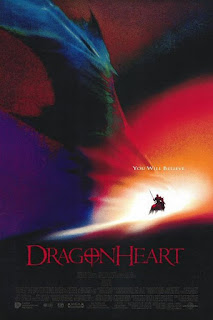 Bowen (Dennis Quaid) is an English knight tasked with educating and training Prince Einon, the son of a cruel Saxon king. When a peasant uprising kills the king and mortally wounds Einon, it is only the intervention of a local dragon that saves the boy's life. 12 years later Einon (David Thewlis) has grown up to become more of a tyrant that his father was, and Bowen has become a bounty hunter tracking down the very dragon whose spell corrupted Einon's heart. When he fails to kill one dragon, named Draco (voiced by Sean Connery), Bowen and the dragon team up on a scam to defraud the local peasantry of their money.

Dragonheart was released in 1996, with its publicity pretty much entirely riding on the sight of a computer-generated dragon flying around and speaking with Sean Connery's voice. The explosion of CGI in Hollywood following the release of Jurassic Park led to a bunch of these sorts of effects-driven, high concept films. Some were hits, some were flops. Most of them have, over the last twenty years, fallen by the wayside. Dragonheart feels like a sort of middle ground film. It has its fans for sure, and was successful enough for Universal Pictures to develop at least two direct-to-video sequels, but it never quite managed to grab the public imagination in any sort of long-term fashion. These days it seems half-forgotten.

'Twee' is possibly too strong a word to use, but there is a remarkably earnest quality to Dragonheart that even by the standards of 1996 make it feel a tiny bit dated. The story is a remarkably straightforward one, and does not really go in much for depth or distinctiveness. At the same time it feels like a bit of a jumble: there are several progressions to the narrative, and none of them feel as if they are fleshed out to their full potential.

The film seems particularly messy in its early scenes, where Bowen - his young king turned evil after ascending to the throne - becomes a dragon hunter on the search for the dragon that corrupted King Einon's heart. There is clearly a desire on behalf of director Rob Cohen to hold off revealing what dragons look like until the on-screen arrival of the main character Draco, and that means viewers are left to watch an entire chase and fight play out without ever actually seeing what it is Bowen is hunting. Given that subsequent scenes show Bowen and Draco reaching an arrangement to fake dragon attacks and slayings for profit, it then becomes momentarily confusing as to whether Bowen had previously been slaying dragons or not.

The concept of a dragon and a dragon hunter undertaking a con game is a great one, but it feels as if no sooner is the arrangement established than it is being replaced by a more earnest and traditional rebellion against King Einon. The film continues to an extent in this vein, short-changing one plot thread in order to more quickly reach the next. A late addition of Arthurian mythology and a visit to the island of Avalon seems the most egregious: its removal would likely have strengthened the remaining film.

Draco is an appealing co-lead, combining Connery's immediately recognisable cadence with a pleasing and effective digital design. CGI is ultimately like all visual effects: if they are achieved with artfulness and integrity, then they will not date. By today's standards Ray Harryhausen's army of walking skeletons in Jason and the Argonauts is rather primitive, but it still works on a narrative and emotional level because the artistry behind its creation was strong. The same goes for the dinosaurs of Jurassic Park and, to be honest, Draco in Dragonheart. Better and more sophisticated CGI has been employed in numerous films in the 20 years since it was released, but the design works, the personality is strong, and therefore the character still work remarkably well.

Dennis Quaid performs valiantly with a simple character and an unintentionally weak and gruff English accent. He goes a long way purely on presence and personality, but it's ultimately one of the film's less effective aspects. Much more appealing is Pete Postlethwaite as a scribe who fixates on Bowen's apparent dragon-hunting career, as well as Dina Meyer as a typically plucky young rebel dedicated to overthrowing Einon's tyranny. Einon himself is great, played in broad villainous strokes by English actor David Thewlis who seems to boast a voice purpose-built to be unlikeable. It's not his accent, lest anyone think I am demonising Northern England, so much as his pitch and cadence. Jason Isaac and Brian Thompson both make for pleasing lackeys as well.

In the end Dragonheart is fun, but only to a certain extent. Its centrepiece - Draco himself - is certainly wonderful entertainment, but the film around him feels perfunctory and a bit lacking. As a simple piece of family entertainment it will likely suffice, but better fantasy adventures have been made both before and since.
Posted by Grant at 5:08 PM