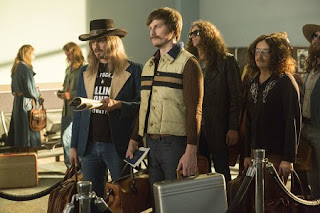 The road crew spend the night awake and talking during an all-night bus trip. Phil reminisces about his first days as a roadie. Milo (Peter Cambor) regrets not expressing his feelings to Kelly-Ann (Imogen Poots) earlier. Reg (Rafe Spall) makes an unpleasant discovery about why he was hired to join the crew in the first place.

The calibre of talent involved in Roadies means that sooner or later the law of averages is going to result in a half-decent episode. It had happened once already earlier in the season, and it is a huge relief to see it happen again: "The All-Night Bus Ride" is an oddly strong episode whose only significant flaw is that it does not link up so well to the rest of the season. In some respects it is a glimpse into an alternate universe where Roadies does not suck.

The unexpected part of the episode is that it is by-and-large devoted to Phil (Ron White) recounting his experience as a roadie for legendary American rock band Lynyrd Skynyrd. The series has given name-checks to real-life bands and musicians for the whole season, including more than a few in-person cameos, but this is the first time it has dived headlong into a prolonged flashback and effectively given the audience a 30-minute truncated biopic of one of them. It is a semi-autobiographical story, since series creator Cameron Crowe rode with Skynyrd back at the beginning of his career, and unsurprisingly feels very similar to his excellent 2000 film Almost Famous.

Nathan Sutton does a great job playing Lynyrd Skynyrd lead singer Ronnie Van Zant. Likewise Connor Weil is excellent as the young Phil - so good, in fact, that I found myself wishing Roadies had been a 1970s-set period series rather than the much more anodyne 21st century story that it is. Young Phil is also a lot more enjoyable to watch that the old version, who remains the series' most exaggerated and unlikeable character.

Back on the bus the episode is a less consistent affair. One highlight is Reg finally working out that the task for which he was hired - cutting the budget to make a world tour affordable - is effectively impossible, and his real purpose is to encourage Tom Staten to split from Christopher House and start a solo career. The dread on his face by the episode's end is palpable, since such a split means the end of the tour and unemployment for the entire regular cast. Reg seems to be the series' solo character to receive an honest-to-god dramatic arc, and his slow discovery here has been well-earned by progress in earlier episodes.

The lack of similar development for other characters leads to other aspects of this episode falling flat. Milo pines over Kelly-Ann, but any romantic leanings in her direction here would only work if they had been set up in the seven episodes beforehand. Similarly Wes (Colson Baker) starts talking about his future goals out of nowhere, and as a result it doesn't convince. I imagine in the universe where this episode was the norm and not the exception, these story arcs would have been better developed in advance.

Shelli (Carla Gugino) and Bill (Luke Wilson) continue their affair, which is a dramatic tightrope the series really is not qualified to walk. It makes both characters slightly unpleasant people to watch, since we know Shelli is married - and has to bail from the bus mid-episode when her father-in-law dies. While this arc does benefit of having been developed over a series of episodes, it still struggles because it has been so completely over-loaded with cliches. It is ultimately a rather boring aspect of the series, since it has failed to take its characters anywhere fresh or intriguing.

A prolonged glimpse of show-within-a-show Dead Sex makes for a pleasing diversion, and in one uncharacteristically deft bit of writing actually informs and provokes Reg's storyline.

This was a really enjoyable episode, despite its flaws. It is a real shame Roadies cannot hit this level every week, since the series concept is sound and the potential was always huge. Instead I strongly suspect the series, which has not done that well in the USA, is going to die with its tenth episode in two weeks.
Posted by Grant at 7:09 AM