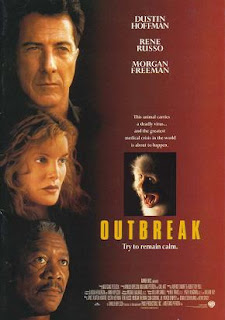 After uncovering a 100 per cent lethal blood-borne virus in the Democratic Republic of the Congo, military virologist Colonel Sam Daniels (Dustin Hoffman) demands for an immediate warning to go out to all American border controls and medical centres. His demands are ignored, and before long a deadly outbreak of the virus occurs in the town of Cedar Creek, California. While Sam and his team fight to contain and cure the virus, his US Army masters - personified by Major General Donald McClintock (Donald Sutherland) - are secretly working against him.

In 1994 Richard Preston's non-fiction book The Hot Zone became a publishing sensation, and Hollywood rushed to adapt it into a narrative feature film. It was 20th Century Fox that won the bidding war to the book's movie rights, and they quickly signed up Ridley Scott to direct and Jodie Foster and Robert Redford to star. Not to be left out of the opportunity, Warner Bros - which had failed to get the rights - simply developed their own virus-based medical thriller at breakneck speed. They hired Wolfgang Petersen to direct and, after failing to court Harrison Ford, cast Dustin Hoffman to star. So smoothly did the Warner Bros production Outbreak hit the script that The Hot Zone, despite being the earlier project, floundered and collapsed in pre-production and was ultimately never made.

There was always tremendous screen potential for the Ebola virus, a lethal filo-virus detailed in Preston's book that causes flu-like symptoms followed by haemorrhaging from every orifice and a rapid liquefaction of bodily organs. It is a naturally occurring real-life horror movie, and Preston's book remains one of the most disturbing and downright terrifying books I have ever read. If anything Hollywood needs to pull back from just how horrifying a virus Ebola is, because to represent its symptoms with 100 per cent fidelity would be to render the film unwatchable by all but the most ardent gore-loving fiends. Outbreak certainly fiddles around with the virus, essentially making it more lethal but less visually upsetting, and giving it the sort of binary qualities - you're going to die within hours, unless an injected vaccine at the last minute cures you - one tends to expect from a two-dimensional Hollywood blockbuster. It is not the worst science seen in Outbreak, but it is certainly of the wobbly variety that wouldn't stand up to much scrutiny.

Not that this sort of accuracy would ultimately matter. Outbreak is a deliberate sort of roller coaster ride, in which the virus simply exists as a challenge to be defeated and deadline against which its cast races. Petersen refuses to slow down, jumping from Africa back to America and into a town under siege where the stakes are raised so aggressively high and fast that by the time the climax reaches duelling attack helicopters it does not feel remotely strange or out of place. It is easy to criticise the film for its stupider plot developments and coincidences, but at the same time Petersen keeps it all brisk and tense enough that they feel like churlish and unnecessary complaints.

Of the film's saving graces is its cast. These are grown adults and smart scientists and professionals. They have normal kinds of adult conversations, and clearly know what they are talking about. It is this kind of mature cast that can save a film like this, whether it's Dustin Hoffman playing a wound-up slightly paranoid military doctor, or Rene Russo playing his firm, enormously competent ex-wife, or even Kevin Spacey as Hoffman's jocular, wry offsider. The supporting cast are uniformly strong, including Donald Sutherland as a cold, calculating military general, Morgan Freeman as the middle man trapped between supporting Daniels' efforts and hiding McClintock's military conspiracy, and Cuba Gooding Jr is a fresh-faced new recruit to the virus investigation team.

This is not an all-time classic of 1990s cinema, but it is a very slickly produced and enjoyable thriller. It has a strong pace, smart characters and enough original moments and aspects to make it feel reasonably fresh and entertaining. James Newton Howard's score ups the atmosphere and tension, and Michael Ballhaus' cinematography keeps it looking dramatic and dynamic. In all honesty, this is what an average Hollywood thriller should feel like. The fact that instead it's on the better end of the continuum is as much a savage indictment of Hollywood's script and production quality as it is praise for Petersen's film. It is a shame that Preston's book never got the Hollywood adaptation it deserved, but Outbreak remains a broadly entertaining substitute.
Posted by Grant at 8:18 AM