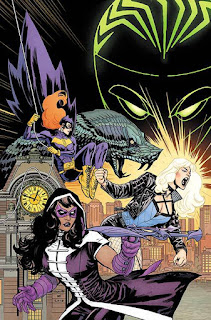 When DC Comics published Batgirl and the Birds of Prey Rebirth, I was relatively unconvinced by it and suspected I would not bother picking up the series proper. I am glad that I did: this proper issue #1 is a much better and more tightly written affair, with good art and a really nice sense of humour to it. The premise is pretty simple: someone is masquerading as Batgirl's former identity Oracle and selling information to the highest bidder. Batgirl wants her shut down and has roped in best friend Black Canary to help. Their paths have now crossed with the Huntress, a vigilante on a crusade to rid Gotham City of its gangsters.

I couldn't tell you why the last issue fell slightly flat and this issue worked so well. Claire Roe's artwork for one feels a lot more accomplished. The script, by Julie and Shawna Benson, is much stronger and packed with a lot more story. If you are an old-school fan of Birds of Prey, I suspect this book will satisfy your nostalgia. If you're new to the team, this issue works as a perfect new origin.

DC Comics have really made this Rebirth scheme work. The New 52 was nowhere near this accomplished or of such a consistent quality. I figured I'd be sticking to a small number of titles going through this initiative, but instead I'm reading more DC titles than I was a year ago. It looks like I'll be reading this one too. (5/5)

DC Comics. Batgirl and the Birds of Prey #1. Written by Julie Benson and Shawna Benson. Art by Claire Roe. Colours by Allen Passalaqua.

Under the cut: reviews of Black Widow, Descender, Invader Zim, Poe Dameron, and The Wicked + the Divine.

Magnus the Black has been escorting a young orphaned Christian further and further into the north. Now the tables have turned in the most unexpected of ways, and the plot suddenly shifts off into an unexpected but absolutely thrilling new direction. This is an issue with surprises, unpleasant back story and perhaps most importantly a real injection of energy and drive. This issue concludes the first volume of Black Road, but a second arc is promised soon - and from the way it is heralded here I think it is going to be even better than the first. (5/5)

I have been waiting for Waid and Samnee's take on Black Widow to finally kick high gear and become as good as it should be, and it seems that gear kicks in here. After betraying SHIELD and finding herself blackmailed by the mysterious "Weeping Lion", Natasha Romanov now has to face Iron Man, who has just discovered her part in his origin. It's a great issue with atmospheric art, a strong plot and a bunch of nice surprises. It sets everything up for a much more interesting issue #7 when the book returns this October. (5/5)

This third arc of Descender has essentially jumped back issue-by-issue to show the back stories of the main cast. This issue, rather surprisingly, focuses on Tim-21's pet robot dog Bandit. It is, at turns, both funny and sad as the faithful pet watches over Tim for so long and, in the present, may hold the secret to an adult Andy - for whom Tim was originally activated - to track his former playmate down. While this arc has absolutely slowed the momentum of the main storyline to an absolute crawl, it is making all of the characters more relatable. It's solidly enjoyable stuff. (3/5)

Oni's Invader Zim comic has been a relatively hit-and-miss affair. This issue seems to be one of the better ones: after chasing Zim in a spaceship at high speeds around the sun, Dib finds himself thrown into the Earth's future where Zim has successfully invaded the world. For Zim it's a glorious chance to sit side by side with his future self - until he discovers Future Zim does not want to share. It's all fairly silly fun with enough Zim-style humour to make it work. A particularly creepy and rather wonderful back-up strip by Dave Crosland is an added bonus. (3/5)

Poe Dameron and his squadron are on a prison planet in search of information, but the only way to get it from the Hutt that has it is to break him out of prison. This means BB-8 and a group of astromech droids to the rescue. It's a wonderfully cute set-up, and Charles Soule milks it well. This book has definitely improved in its last two issues compared to the first three, and is fast-becoming a pretty strong read for Star Wars fans. That said, it's still far from perfect: the bottom line is that we've barely had a chance to see the big screen Poe, and basing an entire ongoing monthly around him is proving a very big ask. (3/5)

"Rising Action" reaches its climax, and it's both a large-scale explosive finale and a genuinely surprising conclusion. I had the strongest sense when this story arc kicked off that it was going to mean the end of the comic, and now that we're here it turns out the story has been blown wide open. What happens next is anybody's guess. As always the dialogue and artwork is top-notch. I really enjoyed this storyline; the previous one, "Commercial Suicide", really did feel a bit too slow and meandering for its own good. (4/5)

This was the 300th Pull List column on The Angriest. Thanks for reading!
Posted by Grant at 7:29 AM