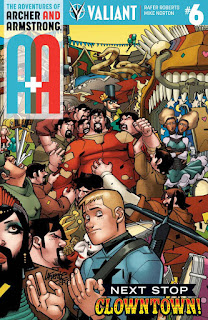 A new story arc is kicking off in A&A, so now seems a good time to drop into this Archer and Armstrong monthly and see how things are faring. For those who have never read the book: Archer is a young martial artist and trained assassin who was raised by a religious cult to murder the devil. The devil, in their case, turned out to be Armstrong - a 6,000 year old shambolic drunkard. Together they now have adventures.

This is a great comedic riff on the superhero genre, with Archer and Armstrong currently on a quest to relocate the wife that Armstrong accidentally forgot about 3,000 years earlier. They are challenged in a diner by a gang of circus-themed criminals, and attend a circus performance with every expectation that it is about to explode into an all-out brawl.

Rafer Roberts has a good line in snarky dialogue, and he keeps the narrative moving along at a brisk pace. Mike Norton does a stunning job with the artwork. I am a huge fan of his work on Revival, and it is nice to see him relax into something a lot more light-hearted and breezy. This is a really fun book. Some of the finer details will obviously fly over new readers' heads, but none of them seem necessary to enjoy the story and the funny characters. Once again Valiant produce a readable, wonderfully entertaining book. (4/5)

A&A: The Adventures of Archer and Armstrong #6. Valiant. Written by Rafer Roberts. Art by Mike Norton. Colours by Allen Passalaqua.

Under the cut: reviews of The Black Monday Murders, Daredevil, Darth Vader and Ringside.

Jonathan Hickman has always presented as an heir apparent to Grant Morrison. The two writers share the same love of complex narratives, esoteric research, wild inter-dimensional magic and general strangeness in their stories. The Black Monday Murders, Hickman's latest writing effort, is not going to change anybody's opinions on that. It presents a secret magical cabal, hidden behind the scenes of Wall Street, that manipulates and profits from the stock exchange. There has been a murder, an apparently psychic police detective is on the case, and the various power brokers of the mysterious Caina Investment Bank play politics with one another. This extra-length issue is cleverly written and clearly very well researched. Tom Coker's artwork has a shadowy, ominous sort of vibe to it. Text sections littered through the book - a regular feature of Hickman's creater-owned books - provide further background and context. This is a really great sort of genre thriller. I can't wait to see where it goes. (5/5)

After a great two-part story featuring Spider-Man and Daredevil teaming up in Macau, we are back in New York and back to Charles Soule's unfortunately dreary and angst-ridden main storyline. I know that grim rain-slicked street and overwhelming Catholic guilt are Daredevil's stock-and-trade, but this time around it just feels so completely generic. The addition of a new sidekick hasn't really helped, because there hasn't really been enough to let the readers properly connect with him. These oddly short story arcs are not helping either. I assume they will eventually all tie into a broader narrative, but for now they all feel a bit rushed and unfinished. (2/5)

It's dream sequence time in this penultimate issue of Darth Vader. That means low plot, big character development and a lot of brilliantly iconic splash pages and large panels. Despite the paucity of story here, it's all pretty great. I really like when Star Wars comics combine elements of both the original trilogy and the prequels together, essentially knitting them together in a way the films did not really manage to do. Here it's all about reminding the reader that Darth Vader the monster is still Anakin Skywalker the man on the inside: it's very well done. (4/5)

Ringside returns after a brief hiatus for its second story arc. I really like the concept of this book, which blends the world of professional wrestling with a grimy crime story to outstanding effect. Nick Barber's art is well-suited to it as well, using a minimum of lines to express huge amounts of character and emotion. It looks simple; I can almost guarantee it isn't. The script, however, feels a tiny bit slow and lacklustre this month, but that may just be the delay since issue #5. Hopefully things will come up to speed next month. (3/5)
Posted by Grant at 6:28 PM