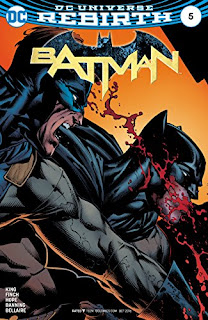 After a few issues to get a run up, Tom King's Batman is finally delivering the goods, as Batman confronts the city's new and out-of-control hero Gotham. For just 20 pages of story it's surprising just how much King squeezes in to this climactic issue, both in terms of plot and varied tone. It is a wonderfully satisfying read.

So what do we get for our US$2.99? Alfred in disguise as Batman, which is an unexpected comic gift. Unexpected guest appearances by other DC Comics characters. A satisfying and deeply intriguing origin story for Gotham and his sister Gotham Girl. Character development for both of them and new Bat-apprentice Duke Thomas. Some great action beats. Some strong dialogue. Most striking of all is the end-of-issue narration that jumps forward some years and gives a few hints at the events to come in King's run.

This is one of those comics that does not simply feel like an improvement upon earlier issues, it actually improves those issues. Re-reading some of the odder parts of the last five issues, apparent inconsistencies - like the Gotham siblings' variable super-powers - now make perfect sense. Things are looking pretty positive for Batman in King's hands: I hope it all continues as well as this issue did. (5/5)

Under the cut: reviews of Jackboot and Ironheel, Star Trek, and Superman.

Eddie Neale is a footballer turned air force gunner during World War II. When he is the sole survivor of a plane crash in German territory he is escorted to a nearby POW camp, where something horrific and supernatural appears to be underfoot. I'm not entirely sure why, but Nazis and the occult seem to go hand in hand for horror fiction. This new miniseries is no exception, telling a by-the-numbers but very well executed story of undead soldiers and a haunted castle. Millgate's art feels fairly early career - the proportions of the characters are sometimes a bit off-key - but it has a simple effectiveness that makes the whole thing tremendously readable. It isn't original, but it's certainly got entertainment value. (3/5)

IDW's reboot-era ongoing hits its final issue as an unexplained phenomenon in space keeps swapping the minds of alternative universe Enterprise crews. Basically it's an excuse for a crossover between the original series characters and those of the post-2009 reboot films. Unfortunately at just two issues the arc feels a little too limited and truncated to work. Tony Shasteen's artwork is good, and captures the likenesses of the various casts pretty well, but in the end it's simply too rushed to have an effect. It's a shame; hopefully IDW will revisit the concept down the line and give it the room that it deserves. (2/5)

As part of their celebrations of Star Trek impending 50th anniversary, IDW has published this collection of cover artwork from a range of their various ongoings and mini-series based on the property. While the quality of the art understandably varies, there are some beautifully composed pieces of artwork in here, all able to be seen without getting sections obscured by logos and credits and the like. It is also an impressive showcase of just how many Star Trek comics IDW has published. Obviously this is a book strictly for the hard-core fans and collectors, but if it is your kind of thing I suspect its publication will be very welcome. (3/5)

This issue combines a mixture of good and bad elements. The bad is, to be honest, this interminable Eradicator storyline, in which the Kryptonian super-weapon hunts down Clark's son Jonathan like a Terminator. Bottom line is that such a plot simply isn't interesting the way it is being written. Where the book excels is in the extra details: Batman's secret moonbase (of course Batman has a moonbase), and Lois' strapping-on of Batman's super-powered suit from "Robin Rises" to fight the Eradicator herself. Moment to moment this issue gets positively gleeful. Elsewhere it's an odd sort of bore, which is sad given how strongly this first arc kicked off. (3/5)
Posted by Grant at 5:08 PM