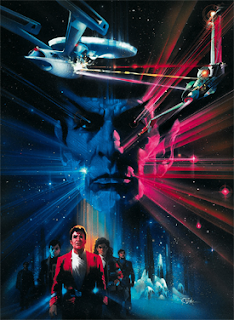 Following the creation of the Genesis Planet and the death of Captain Spock (Leonard Nimoy), the Enterprise limps back to Earth for repairs - and for its crew to come to terms with their loss. When Kirk (William Shatner) learns that Spock's 'katra' - or soul - has been transplanted into the mind of Dr McCoy (DeForest Kelley), he and his command crew steal the Enterprise from Spacedock and return - against orders - to Genesis. There a rogue Klingon commander (Christopher Lloyd) is already attempting to capture the Genesis project to use it as a weapon.

Released two years after The Wrath of Khan, Star Trek III: The Search for Spock was a direct sequel. The story picks up right after where Khan left off, and continues the narrative with a greater sense of serialisation than even the television of the time did. This contributes in no small way to the overall sense that of the first three Star Trek films The Search for Spock is the one that far and away feels the most like the television series upon which it is based.

Perhaps it is because this film was directed by Leonard Nimoy, who would knew as well as anyone what made the original Star Trek tick. Perhaps it is the odd way that the film was shot entirely on the soundstage, lending a Trek-like sense of unreality to all of the scenes set on the rapidly deteriorating Genesis Planet. Perhaps it is also the manner in which the film features Kirk going up against the Klingon commander Kruge, including the now notoriously unrealistic 'Shatner fighting' that featured in so many classic Star Trek episodes.

There is a long-running rule of thumb that Star Trek movies can be rated by odd and even numbers. Later films caused this rule to wobble somewhat, but a rewatch of The Search for Spock suggests that even back near the beginning of the film series the rule was not particularly reliable. While nowhere near as accomplished as The Wrath of Khan, The Search for Spock is an effective and entertaining science fiction adventure movie.

The stakes are wisely kept high: retrieving Spock's body and bringing him back to life could be so easily presented as a weak 'cheat' on the audience, robbing the previous film of any drama or sense of sacrifice. While Spock is saved by the end of the film, his rescue comes at a terrible cost. Kirk's son David (Merritt Buttrick) is killed, and the Enterprise is destroyed. It is easy today to gloss over the Enterprise's destruction. Star Trek: Generations destroyed the Enterprise. Star Trek Beyond destroyed it. Star Trek: Nemesis, Star Trek and Star Trek: Into Darkness all came damned close. After the trick has been performed enough times it is easy to forget just how powerful a scene it was back in 1984. This was the Enterprise, arguably the most iconic element of Star Trek, and Kirk activates its self-destruct. Similarly David's death is deeply effective: William Shatner's performance in the scene is about as good a piece of acting as he's ever done.

Christopher Lloyd makes for a great villain, playing Kruge with a wonderfully exaggerated sense of villainy. Is he as good a villain as Khan? Probably not, and I suspect therein lies the problem for much of this film. The Wrath of Khan is a movie that transcends its Star Trek origins to become an honest-to-god great film. The Search for Spock, as merely really good Star Trek, sits too much in its predecessor's shadow to make a proper impact. I really think it is overdue for a re-appraisal.
Posted by Grant at 7:10 AM