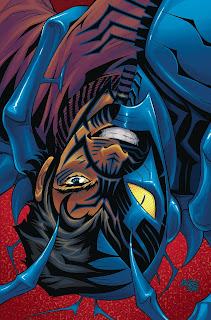 Blue Beetle is one of the DC superheroes that probably means something different for two separate sets of readers. For the readers of the 1980s he's Ted Kord, multi-millionaire turned costumed hero who eventually fell in with Booster Gold in the Justice League and become a long-running comic relief character. He eventually got shot in the head by Maxwell Lord because, well that was back when DC fans were not allowed nice things. Before then, however, he'd already effectively been replaced by teenage hero Jaime Reyes, who had the sorts of personal crises one gets in high school while simultaneously having an alien transforming scarab grafted to his back.

As part of DC's "give everybody what they want" Rebirth initiative, Blue Beetles has been revived starring not Reyes or Kord but both working together. Sadly it's not a great first issue. Keith Giffen's jokey writing style working excellently back in the 1980s, but the older his schtick becomes the less effective it is. This feels like a tired comic already, and it's not just beginning. Add in some fairly perfunctory art by Scott Kolins - never my favourite artists - and Blue Beetle Rebirth is just a flat-out redundant book. DC is doing too much excellent stuff at the moment to waste time on the mediocre books.

I do think Blue Beetle has potential; I don't think it's going to get realised in this book. (2/5)

Under the cut: reviews of Action Comics, Batgirl, and Detective Comics.

In answer to the question "how many issues is Dan Jurgen going to make Superman have a fistfight with Doomsday?", six appears to be the case. The long and enormously drawn-out fight finally reaches a conclusion this issue, along with a short wrap-up, a few nice character moments, and a neat little stinger at the end based around the mysterious Mr Oz who has been observing Superman since before the New 52 ended. Is it a must-read comic? No. Is it enjoyable superhero action? Absolutely - and there is always a place for that. (3/5)

Batgirl's adventure moves from Japan to Singapore, although going from the artwork I am willing to bet money that artist Rafael Albuquerque has never been there. I'm not entirely convinced that writer Hope Larson has either. What is the point of setting a story in a specific city locale when it could easily be almost any city in the world? It's a missed opportunity. The characterisation is an improvement from the first issue, and there is a lot of nice expressive work in the art, but I still feel this book is running at half speed. (3/5)

There is a pitch-perfect flashback scene at the beginning of this issue that sees Bruce Wayne and Kate Kane together as children at the funeral of Bruce's parents. It's a wonderful few pages, and they cement together the characters of Batman and Batwoman more effectively than anything DC has chucked at them in the last 10 years. The rest of the issue is solid stuff too: Tim Drake is making some changes, Batman and Batwoman reach an agreement, and Colonel Jacob Kane takes another step towards fully-fledged villainhood. Great cliffhanger too. (4/5)
Posted by Grant at 7:30 AM