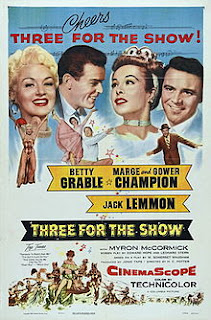 When stage performer Julie (Betty Grable) loses her husband Marty (Jack Lemmon) during the Korean War, she moves on by marrying his former writing partner Vernon (Gower Champion). Two years later Marty turns out to have been marooned on an island all along, leaving Julie with two husbands at the same time. Rather than choose one over the other, she decides to keep both.

Three for the Show is a slightly bizarre Hollywood musical starring Betty Grable in her penultimate film role. As one career wound down, however, another picked up, with the film giving Jack Lemmon one of his key early roles as the competitive romantic Marty. The film is unusual in the way it aggressively skirts the line in pushing references to its characters' sex lives in such a mainstream studio fare. The Hays Code, which had rigorously policed movie standards in relation to sex and violence, was winding down by 1955 but it was certainly still there. I was slightly surprised at how enthusiastically Three for the Show seemed to enjoy prodding it.

As a musical, it must be said that the film is a little lacking. The most famous song in it is the Gershwin standard "Someone to Watch Over Me" - and that was already 29 years old by the time the film got made. Elsewhere the film does a fine line in surreal ballet numbers, which was very much the fashion in Hollywood at the time. The best of these focuses upon Gwen (Marge Champion, wife and performing partner of Gower), who radiates humour and warmth throughout the film. By comparison Julie comes across as a tiny bit irritating. Grable has a weird presence here: she was only 39 when she shot it, but whether make-up, costuming or lighting, she comes across as a solid decade older than that. Certainly she seems visibly older than her two screen husbands. On the one level it feels a little dischordant. On another it feels like a striking reversal of how Hollywood typically does it: old men married to hot young women.

Elsewhere the storyline ambles along in a fairly predictable fashion, saddled with a lot of stereotypes and genre standards. There is a show to put on, and achieving that means the angry lovers no longer speaking to one another must be tempted into the same room together, and so on. While the songs are not the film's selling point, the story probably isn't either.

So what is there to recommend? Gower Champion and Jack Lemmon are fantastic as two friends and writing partners turned romantic rivals with the same wife. Marge Champion really is a wonderful actress. She and her husband share a romantic dance number towards the film's end that is just perfectly choreographed and staged.

Then there are the film's sexual politics, which really do come as a bit of a surprise. When Julie decides to keep both husbands rather than divorce one of them, it's expected that the arrangement will last for a comedic scene or two. It lasts for more than half the movie. Marty and Vernon grow increasingly bitter and competitive, while Julie really does seem to want two husbands. It almost reaches a point where you imagine she's going to want them simultaneously, but ultimately the film doesn't go quite that far. It is a really odd movie. I enjoyed it, but I could also see why it has fallen by the wayside. I am keen to see more of Gower and Marge Champion though: those two really seem to have something.
Posted by Grant at 7:59 AM