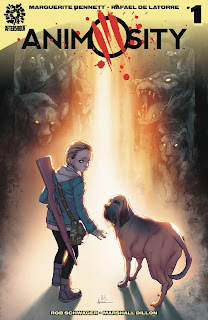 Imagine if all of the animals in the world suddenly developed the ability to talk to humans, and then went on a murderous rampage against us. That is the premise of Animosity, a new comic book by Marguerite Bennett and Rafael De Latorre. Its first issue was published this week by Aftershock Comics, who have been publishing a fast-growing range of interesting books. This is yet another one.

The premise has a wonderful Hollywood vibe to it - I wouldn't be surprised if it gets picked up by one of the studios very soon - assuming it hasn't been already. It is essentially The Birds writ-large, with some added weirdness from all of the talking animals. There are also some nice surprises in the issue itself: not every animal is out to kill humans, just the majority. Our protagonist, for example, is actively defended by her now-talking dog.

Rafael De Latorre's artwork is strong, and very nicely coloured by Rob Schwager. The whole book has a sort of DC Vertigo vibe, in the best possible way. My only real criticism is the length. While the book has the now industry-standard 20 pages of art, its use of large panels and particularly an impressive six-page sequence showing the mysterious event occurring in the first place mean that there's precious little room for story. All we're really getting here is a hook, and while it's a neat hook it really needed to come with a solid chunk of narrative to seal the deal. There's promise here, but we need more each issue to make it worth the cover price. (3/5)

Under the cut: reviews of Bounty, Doctor Strange, and The Fuse.

Kurtis J. Weibe's new science fiction series is a space opera riff in the same way that his popular hit Rat Queens played around with fantasy: it has a cast of strong, foul-mouthed women who go on adventures - in this case bounty hunting - and have all kinds of problems and hijinks along the way. This issue not only showcases one of those adventures, it also continues develop and expand upon a broader over-arching storyline. Mindy Lee's artwork is distinctive and energetic. There is a wonderful sense of colour to the book too, with a lot of brightness than sci-fi books often avoid. (3/5)

"The Last Days of Magic" hits its climax; it's basically been one extended 10-issue epic, and to be honest now that we're out the other end it feels a little flat and ordinary. This is not a question of whether or not this arc was good. It was entertaining, and has brought back Strange in fine form. The question that I find myself dwelling on is whether or not this book has been good enough. There is huge potential to the character, he is about to get his first feature film, and this could in the right hands and with the right story be one of Marvel's biggest properties. A lot of the problems for me are actually with Bachalo's artwork, which is a little too haphazard and messy. A cleaner, neater look would have made this a much better read: check out the Kevin Nolan cover, for example. That's the look I want for Strange. (3/5)

This second part of The Fuse's latest storyline does a brilliant job of making the procedural personal. On the one level it's a story about the Fuse police department investigating a terrorist group, but add in complications like Klem's son getting unexpectedly involved, and Ralph personally infiltrating the group that's being chased down, and the emotional stakes are set to go through the roof. This feels like it might be the final storyline. It very well might not be, but there's a deep-rooted sense of climax about this issue that makes it an addictive and hugely entertaining read. This continues to be one of the very best comics on the market. (5/5)
Posted by Grant at 5:37 PM