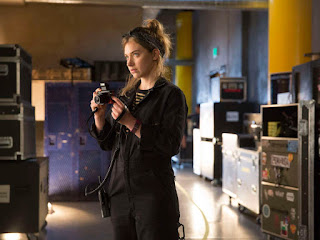 It is 7 August 2016, and time for another episode of Roadies.

The Staton-House Band tour moves to Seattle. Phil (Ron White) returns to the crew, and joins Bill (Luke Wilson) and Reg (Rafe Spall) on a mission to retrieve stolen property from super-fan Mike Finger. A world-famous rock photographer (Roseanne Arquette) arrives to take a picture of the band, running both Shelli (Carla Gugino) and Kelly-Ann (Imogen Poot) up the wrong way.

The previous episode of Roadies, "Longest Days", marked an unexpected upswing in quality towards something that actually seemed rather good and entertaining. With "Carpet Season" the quality crash right back down again. It forms itself around plot beats that the audience has already seen, and it introduces yet another immediately unlikeable and deeply exaggerated guest character too. One previous episode showcased an arrogant and vain music critic. This episode effectively does the same thing that the earlier episode did to critics, only this time it is rock photographers in the series' sights.

How did this come to be picked up as a reasonable creative choice? Is series creator Cameron Crowe simply running through all the people who hurt his feelings as a Rolling Stone journalist? It feels petty and mean, and the characters that the series consistently introduces and then tears down uniformly have weak motivations, ridiculously exaggerated personas and by the end of the episode get taken down by the seemingly always-correct, always-righteous regular cast.

The saddest part is that Roseanne Arquette, who plays spoiled photographer Abby Van Ness, is a much better actor that her material suggests. There are a dozen solid plot threads that could have been generated by aspiring photographer Kelly-Ann meeting her idol, and Roadies picks the silliest and the meanest: the famous photographer's shoot fails miserably because she has misjudged the band, and Kelly-Ann swoops in to get the perfect shot in one.

Meanwhile Mike Finger (Ely Henry), who last week appeared to be a fascinating and quite well-measured rock band super-fan, turns out to be a thief who stole numerous items from backstage including Christopher House's iPad. It is a shame that, after so much good work was done making Finger an interesting and unusual character, the very next episode ruins him entirely. What is weirder is that a whole section of the plot thread involves Bill seeing a raft of old Staton House Band memorabilia and realising just how much he's changed as a person. That would be a rather neat development had it not already happened several episodes ago.

I had hopes that Roadies had finally found its feet. If it did find them, it lost them again. Then fell over. This is such a terribly weak series.
Posted by Grant at 9:01 AM