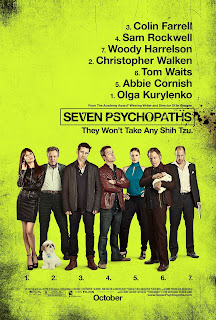 Marty (Colin Farrell) is a Hollywood screenwriter struggling to begin his latest screenplay. He has a title - Seven Psychopaths - and he has an agent desperately badgering him to finish, but he is yet to even beginning writing the first draft. His best friend Billy (Sam Rockwell) is an unemployed actor who runs a sideline in kidnapping dogs with his friend Hans (Christopher Walken). When Billy and Hans accidentally kidnap the pet of violent criminal Charlie Costello (Woody Harrelson), Marty begins to get all of the research material on psychopaths that he needs.

Seven Psychopaths - the actual film, not Marty's unwritten screenplay - is a wonderfully idiosyncratic black comedy from writer/director Martin McDonagh. It combines a pile of great elements: a knowingly ridiculous plot, wonderfully dark and unexpected humour, and a string of great performances by some of Hollywood's best male actors. If there is a key criticism of the film to be made from the outset, it is that it is an overwhelmingly male film. There are essentially three female roles in the whole piece, and they're all girlfriends or wives to the male stars. McDonagh's script even calls it out, with Hans warning Marty he cannot write female characters to save his life. That may be true of the character, but wryly admitting the faults in the actual screenplay to the audience does not actually excuse those faults. It almost feels smug.

There is also that wonderful Hollywood cliche: a writer producing a script about a writer. I know they always tell budding screenwriters to 'write what you know', but the number of films made each year that focus on Hollywood 'inside baseball' continues to boggle the mind. To be fair, McDonagh's attempt is much stronger than most. That is partly because he wisely uses Marty's writer's block to lead into a much more original story of gangsters, vigilantes and kidnapped pets. The screenplay is packed with funny dialogue, shocking moments of comedic violence, and more than one unexpected plot twist. It does not outstay its welcome, and it exploits its various story assets incredibly well.

Colin Farrell is a great lead. He is always at his best in smaller films like this. Hollywood spent years desperately attempting to hammer him into a leading man status, but it was an unwinnable battle. (They've since turned to trying the same thing with Jeremy Renner.) Farrell is particularly great at showing Marty's growing desperation as his situation gets desperately out of hand.

Sam Rockwell has the film's most distinctive part, and it is one that develops a lot as Billy's back story is revealed. To an extent, however, it feels a little like schtick rather than a fully thought-out performance. It works to a large extent, but I feel something more could have been made of it. Christopher Walken is much better, giving a fully layered portrayal that still retains his trademark cadence. One scene in particular sees Hans meeting Costello face to face for the first time, shortly after Costello has murdered Hans' wife. Hans knows who Costello is, but Costello is completely in the dark. It is a remarkable scene, blending comedy and tragedy in a fluid manner. For his part Harrelson is great as Costello, a bit of an idiot with some severe anger management issues. Like Farrell he is an actor who seems to get better the lower the budget of the film he's in.

The film dances around in a fairly chaotic fashion, possibly masking the brevity of its plot. Sometimes the seemingly random segues work well - Tom Waits has an incredible role as a rabbit-bearing murderer of serial killers, and Harry Dean Stanton makes an iconic appearance as a vengeful Quaker. Sometimes they fall a little flat - Rockwell gets to narrate and perform a proposed climax to the story that drags on too long and hits too many stereotypical beats.

In the end Seven Psychopaths is flawed, but still manages to be tremendous fun. There is certainly more than enough here to keep an audience well entertained, not to mention occasionally shocked and surprised. In the field of quirky American violent comedies, it is absolutely one of the better ones and well worth checking out.
Posted by Grant at 10:41 PM