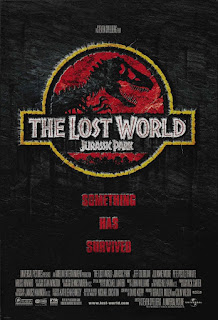 Four years after the disaster on Isla Nublar, Dr Ian Malcolm (Jeff Goldblum) is summoned to meet with Jurassic Park owner John Hammond (Richard Attenborough). Hammond reveals the existence of "Site B", a second facility on the neighbouring island of Isla Sorna, where the dinosaurs are continuing to breed and thrive. When Hammond loses control of his company to his ambitious nephew (Arliss Howard), Malcolm is thrown into a race to stop the dinosaurs from being taken off the island.

The Lost World: Jurassic Park marked a rare sequel for Steven Spielberg. Other than his Indiana Jones films, this remains his only follow-up in a career running through its fifth decade. It is a much darker, more complex film that its predecessor, a direction that both benefits and damages it. All things considered it is a step down in quality from Jurassic Park, and yet of the four films in the series it is the one to which I return the most often.

There is an amazing amount of good stuff to be found here, even if its assembly is a little scrappier and more haphazard.

Alan Grant and Ellie Satler are out of the picture, having been paid off by the InGen corporation to stay quiet over their experiences on Jurassic Park. Ian Malcolm was less cooperative, and now suffers the consequences of standing up to big business: his career is in tatters, and his university tenure has been revoked. He is summoned to visit John Hammond only to learn that there is a second island of dinosaurs thriving off the coast of Costa Rica, and when he learns that his girlfriend Sarah Harding (Julianne Moore) is already observing the animals in the field he joins an expedition not to help her back to drag her back to safety. It is a much darker version of Malcolm leading this film, which benefits pretty much every aspect of it. It makes him effective as a protagonist rather than comic relief, and he comes across as a much more pragmatic and sensible person the second time around. In the original film he predicted everything would go horribly, violently wrong, and when asked why he would spout nonsense about "Chaos! Mathematics! Life will find a way!". When asked this time around, he says "This is exactly what happened last time."

Not that his new-found protagonist status makes Malcolm any less funny. Goldblum is clearly playing the same character, and simply applies his laconic, awkward persona to the role of action star. He gets most of the film's best lines. He gives ominous stares into the unseen, fast approaching terror as good as anybody. He rambles through action scenes like a drunk and startled giraffe. I am a huge fan of Jeff Goldblum; this is my favourite of his films. He manages to be both ridiculous and ridiculously effective at the same time.

New co-stars help to give The Lost World a fresh energy. Julianne Moore is great as Sarah Harding, in what is pretty much her first major blockbuster role. Vince Vaughn is solidly supportive as photographer Nick Van Owen. Richard Schiff, subsequently better known as Toby in The West Wing, is amiable and funny as technician Eddie Carr; his early death at the hands of a pair of T-Rexes is one of the franchise's more upsetting deaths. On the side of the antagonists, Arliss Howard is nicely officious and weak-minded as Hammond's nephew Peter Ludlow. It is fun to watch him slowly drink himself to the point of insensibility over the course of his island adventure, and to show how powerless he actually is once he steps out of the board room. Pete Postlethwaite succeeds at transforming a quite challenging role - a stereotypical big game hunter named Roland Tembo - into someone who is well-rounded, shows depth and actually engenders the occasional moment of sympathy. He was such a talented actor, and while he appeared in many better roles it is the work he did on these more limited ones that really showcases just what a strong actor he was.

The only major character misstep is the shoe-horning in of Kelly Curtis (Vanessa Lee Chester), one of Ian Malcolm's several children, who stows away on his rescue mission. The character is adapted from Michael Crichton's novel, where there were two stowaways, but even in a more personal and scaled-down version the use of a juvenile performers feels way too much like copying the first film. There it worked brilliantly. Here it feels surplus to requirements. Chester gives a good performance, and works particularly well opposite Goldblum and Moore, but she's fighting an unwinnable battle.

The narrative structure of The Lost World struggles. There is a weird imbalance caused by the bolting-on of a lengthy San Diego-set climax, in which a drug-addled T-Rex goes on a city-wide rampage. The material was originally developed for a potential third Jurassic Park film, but was shortened and inserted into The Lost World at Spielberg's behest. Even the earlier island-based storyline becomes slightly messy in its later stages, as the film chooses to focus on Malcolm, Harding and Kelly's escape from a trio of velociraptors and all but abandons Van Owen and Tembo's stories in the process.

Where the film compensates is in specific scenes. A cliff-side confrontation between two T-Rexes and the leads - who have taken a T-Rex newborn to set a broken leg - is hands-down one of the most effective and brilliantly entertaining action scenes of the whole franchise, effectively remixing the original T-Rex reveal of Jurassic Park and then upping the ante of it. It doubles the dinosaurs, heightens the peril, and packs the scene with a lot of funny quips and great moments of tension. Similarly the San Diego sequence, despite throwing off the film's rhythm, is in isolation a brilliant combination of action and absurd comedy. The visual effects have come a long way in just the four years between Jurassic Park and The Lost World. Even today, nearly 20 years later, the film looks fantastic.

The sense of grandeur and epic wonder that lifted the original film was never going to be an option in a sequel, since the audience already knows what the dinosaurs look like. As a result The Lost World dives into the spectacle much faster than its predecessor, and pushes at a much harder pace. It has a much darker tone as well, typified not only be increased violence and bloodshed but also by it strong line in bleak humour, a much milkier and atmospheric look from cinematographer Janusz Kaminski, and a lower, more threatening musical score by John Williams.

This is not as good a film as Jurassic Park, but then no sequel was ever going to be. As a variation on the original, and as an act in simultaneously replicating the original and finding new material, it works remarkably well. It's not the best, but I have to admit it is almost certainly my favourite.
Posted by Grant at 5:02 PM