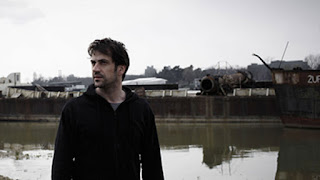 It is 26 October 2015, and time for the first episode of The Last Panthers.

In the port city of Marsielles a jewel heist goes disastrously wrong. While the thieves get away with millions of dollars' worth of diamonds, one of them is injured and a child is killed in the crossfire between the gang and the police. While French police detective Khalil (Tahar Rahim) begins his investigation, he finds his efforts complicated by the arrival of Naomi (Samantha Morton), an English insurance investigator sent to recover the lost diamonds.

The Last Panthers is a bleak and uncompromising crime drama created and written by script writer and playwright Jack Thorne. It is a European co-production, told across multiple countries and in three different languages. It boasts an excellent international cast, including not just Rahim and Morton but also Goran Bogdan, Corinne Masiero and John Hurt. Upon its release late last year it gained a lot of publicty due to its theme music, which was composed by pop singer/musician David Bowie from his forthcoming single "Blackstar". While the music is a great fit for the tone of the series, it is far from its best selling point. This is a great first episode all round.

Three plot threads and a comparatively large cast do make the episode a little bit challenging. The viewer is thrown into the deep end on this one, with a lot of implied backstory teased without being properly explained. It seems pretty clear that the back story and the oblique references will be explained and ironed-out over the next five episode. What this episode is focused on is hooking in the audience, and I think it is very successful in that regard.

Milan (Goran Bogdan) leads the trio of jewel thieves. After the botched robbery they head to safer territory in Eastern Europe, where they quickly discover the child's death has put too much heat on their diamonds to properly sell them. They imagined receiving millions of dollars, and are getting offered two hundred thousand instead. Attempts to negotiate with criminal gangs leave them in perilous danger, and what is worse - the reward money offered for the diamonds' return is more than they're able to sell them for on the black market. That puts a lot of pressure on Milan and his two associates - how much can they really trust one another?

In Marseilles, Naomi and Khalil immediately run into conflict, since their goals differ significantly: Khalil wants to make arrests, while Naomi simply wants the diamonds back by any means necessary. When her boss Kendle (John Hurt) insists she heads to Belgrade to follow the trail, a set of flashbacks reveal that old wounds are going to be opened by her journey; she is a former UN peacekeeper. There is a broken, pasted-together quality to her character that is deeply intriguing. John Hurt's role is small but critical, and of course he creates a marvellously weary character out of it. He is one of the most underappreciated screen actors in the world: everybody agrees he's great, but we are really going to miss him when he's gone.

A climactic chain of events separate Milan from his gang for good, not to mention force his and Naomi's paths together. It is, as I noted above, a tremendous hook into the remainder of the series.

If there is a serious criticism to be made of the episode, it is that it is all a bit too gritty and miserable. Scenes cross back and forth between Marseilles, Belgrade and Hungary in between, but texturally they all seem very much the same. Some kind of visual differentiation between the locations might have made the episode a little easier to navigate. It is, however, a minor complaint in the grand scheme of things. This is a great and nicely dark crime thriller.
Posted by Grant at 5:04 PM