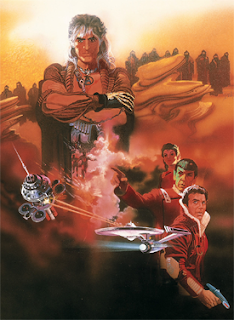 Admiral James T. Kirk (William Shatner) chafes against his new life of administration in Starfleet Command, while his beloved starship the USS Enterprise falls under the command of his former first officer Captain Spock (Leonard Nimoy). Halfway across the galaxy a search for a test site for the Federation's latest technology brings Commander Pavel Chekov (Walter Koenig) face to face with the long-forgotten tyrant Khan Noonien Singh (Ricardo Montalban), whose thirst for revenge leads to a bloody confrontation in space.

Star Trek II: The Wrath of Khan is generally regarded as the best of the 13 Star Trek feature films, and it is as assessment with which I wholly agree. Tightly edited and wonderfully shot, and based on a pitch-perfect screenplay, it represents cinematic Star Trek at its very finest. This film does not feel like a more expensive and lengthier episode of the TV series - despite being a direct sequel to the episode "Space Seed". The stakes are higher, the drama is more intense, and the cost to the characters is far, far dearer. This is one great film.

The film excels for a number of reasons. Firstly it wisely focuses on character rather than spectacle. The film begins on Kirk's birthday, but it is one that he does not celebrate. He feels old and worn-out, lost in administration when his heart is still out exploring strange new worlds. He inspects the Enterprise's training voyage, its crew packed with Starfleet Academy cadets out to prove themselves. When the call comes in that the Federation's Genesis project is in trouble Kirk cannot help himself: Spock steps aside, Kirk takes command and gets to live out his fantasies one last time.

It all goes horribly wrong. He is caught by surprise when the USS Reliant, now commanded by his old enemy Khan, makes a sudden attack on the Enterprise. Both vessels are temporarily crippled and limp away from one another. Kirk goes looking for the Genesis scientists. Half of them are dead, already murdered by Khan, and the other half include not just Kirk's ex-girlfriend Carol Marcus (Bibi Besch) but a son he has never met: Dr David Marcus (Merritt Buttrick). He is now not just old, but a father as well.

The Genesis project is effectively a radical terraforming missile: shoot it at a lifeless planet and an entire viable one will be created in its place, packed with a breathable atmosphere and an entirely new ecosystem. Of course, shot at an already populated world and Genesis becomes the galaxy's most effective weapon of mass destruction. Khan manages to steal it, and after a pitched space battle a dying Khan launches it. While the Enterprise escapes before the colossal explosion destroys the ship, that escape is only possible when Spock sacrifices his own life to repair the heavily irradiated warp core. The film ends with Kirk mourning his dead friend while observing an entirely new planet. He is back where he belongs - on the bridge of a starship - and when asked how he feels, he answers "I feel young." That's The Wrath of Khan: a film literally about life and death, one in the shadow of the other. For a science fiction adventure film it genuinely feels a bit profound.

Spock's death is outstanding. It could easily have worked as a cheap stunt - see the subsequent Star Trek: Nemesis for an example of that - but instead it forms a core part of the film's theme and narrative. The very first scene showcases the "Kobayashi Maru", an academy simulation without a winnable solution. No matter how the students attempt to resolve the crisis, it will end in failure. Lt Saavik (Kirstie Alley), a protege of Spock's, fails the test. Kirk is on record as the only cadet ever to pass it. His solution, revealed midway through the film, was to cheat. The film's climax, and Spock's sacrifice, reflects the "Kobayashi Maru" in two directions. Kirk doesn't believe in a no-win situation, but has to face one at last. Spock, who has never taken the test himself, makes his own solution by sacrificing himself to save everybody else. Their final scene, a distraught Kirk separated by glass from a dying Spock, is well earned and reflects the deep friendship the characters had shared for a then-sixteen years of Star Trek.

Ricardo Montalban is a fabulous villain, eating the scenery in the best possible fashion and wonderfully showcasing a man who is enormously intelligent but blindsided by arrogance and rage. It is remarkable to think that despite Kirk and Khan being seen as one of cinema's great hero-villain pairings, they do not share a room once in the entire movie. Their only contact is via ship-to-ship communications.

Director Nicholas Meyer does an outstanding job with the climactic fight between the Enterprise and the Reliant. Set inside a nebula that all but blinds both ships, the sequence reflects a World War II submarine movie. It is a quiet tense chess game between two ships, each knowing the other is out there, and each liable to make a killing torpedo shot at any time. It is beautifully staged and shot, and benefits marvellously from James Horner's exuberant, dramatic orchestral score.

Star Trek: The Motion Picture, released three years before The Wrath of Khan, was a commercially successful but dramatically underwhelming picture. It suggested that perhaps Star Trek was not capable of being reinvented for a new generation. The Wrath of Khan, produced by a different team and on a vastly reduced budget, proved the opposite: it pushed Star Trek forward into a new style and tone, and ensuring the franchise continued with sequels and new television adventures alike. It is one of the most important Star Trek productions ever made.

The film has recently been re-released as a digitally remastered bluray edition, including both the theatrical edit and Meyer's slightly extended director's cut. It looks better than ever, showcasing not just some great cinematography, but some outstanding visual effects as well. ILM's model work is second to none, and of course the Starfleet simulation video of the Genesis device marks Hollywood's first-ever use of computer-generated images (CGI). Not just a great film, but a historically significant one too.
Posted by Grant at 10:51 AM