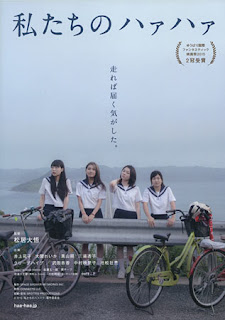 Four high school students in Kita-Kyushu decide to travel by bicycle to Tokyo - a journey of 1,000 kilometres - to see their favourite pop group Creephyp in concert. Their adventures takes them by bike, bus and car, taking in Hiroshima, Okayama and Kobe along the way.

Our Huff and Puff Journey is not a great movie. It comes saddled with a lot of problems and faults, and together they do ultimately derail the film as a whole. While there are plenty of little highlights - a nice bit of acting here, a funny line of dialogue there - those highlights simply cannot outweigh the general issues that sink the whole enterprise. The film is only 91 minutes long, but feels a hell of a lot longer than that at the time.

Daigo Matsui presents the story through a combination of handheld video footage recorded by the girls as they document their journey, and higher-grade handheld footage that presents them from a third-person point of view. The visual similarities between the girls' own footage and the broader scenes makes that a slightly muddled creative choice, albeit one that Matsui openly embraces by the film's final shot. Clever on one level, and vaguely tedious on another. That last sentence is arguably a good summation of the film in general.

There is something that chafes between the relatively grounded, realistic tone of the film and the idea that four teenage girls with no money between them would honestly think a 1,000 kilometre journey across southern Japan was a genuinely good idea. This tension continues throughout the film, with some scenes feeling remarkably realistic and others feeling immensely contrived. It is all flabbily episodic as well, running from scene to scene without any real tension or narrative structure.

Character development seems somewhat lacking as well. The four protagonists move in terms of location, and at one stage have a major fight with one another, but it never feels as if much is learned or changed. By the film's end they seem pretty much identical to how they were at the beginning - albeit poorer and in more trouble with their parents. Their maturity is a regular issue as well, with the girls seeming hopelessly naive in some scenes and then immensely cynical in others.

Of the four, Fumiko (Toko Miura) is the clear standout. She is the group's most obsessive and dedicated Creephyp fan, and clearly treats the road trip much more seriously than her friends do. When they hit a roadblock, she is the one who takes it the hardest. When one of her friends uses social media to ask one of the band members for help she is distraught at how it will make them all look. Toko Miura is also the only professional actor among the key cast. Chie is pretty and naive, and played by beauty pageant winner Saku Mayama. Social media obsessive Sattsun is played by real-life social media celebrity Reika Ozeki. Ichinose stands apart from her friends somewhat, with no plans for college and the strongest desire to simply leave home and try to become a professional musician in Tokyo. She is played by Sonoko Inoue, who is - you probably guessed it - an independent singer-songwriter. Given their inexperience in acting on screen they all do a strong job. Certainly the film's issues are in the script and the way it is shot and paced, not in the performance quality.

Creephyp, the band upon which the girls' affections are centred, is a real Japanese pop group. The focus on the band, and the quest to see them by the film's climax, has the effect of turning the film into a bit of an extended promotion. It is hard not to feel advertised at just a little bit.

Our Huff and Puff Journey is a frustrating film, because while the end result is not particularly strong a much better film is visible in between the cracks. With more assured direction, and a much tighter and well structured screenplay, it could have been quite a nice little teen drama. Instead it is a bit of a waste of time.
Posted by Grant at 7:31 PM