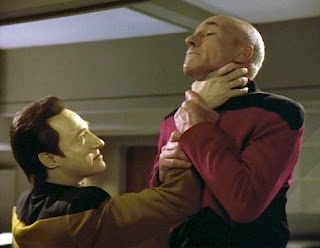 It is 22 February 1992, and time for another episode of Star Trek: The Next Generation.

The Enterprise investigates unusual life signs on a deserted, storm-wracked planet. When the away team returns to the ship, three of them - Data (Brent Spiner), Troi (Marina Sirtis) and O'Brien (Colm Meaney) have been taken over by alien entities intent upon taking over the ship.

"Power Play" is essentially Star Trek: The Next Generation as an action thriller: high on plot and tension but low on actual depth and character. It is also a 'bottle show', using only one set that isn't on the Enterprise and keeping the number of guest performers to a minimum. Within those two restraints it is a pretty entertaining hour of television.

The core appeal for an episode like this - I suspect as much for the cast as for the audience - is the chance to see three of the series regulars acting out with entirely new personalities. It is a great opportunity for Marina Sirtis, who gets to play a much colder and more calculating character than the warm and emotive Deanna Troi. Colm Meaney gets to play a sort of angry tough guy. Brent Spiner seems to be relishing the episode most of all, playing a sadistic and mean-spirited bully that has possessed Data's body. Notably he does not simply re-play Data's sadistic twin Lore, but develops a second and distinct variation on those qualities. Quite how alien entities have successfully possessed an android in the same way they have possessed biological people is left open, and the audience certainly isn't encouraged to ponder on it.

There is no depth to the episode/ It is all plot and suspense, which actually feels like quite a novelty for a series that is much more prone to scenes of dialogue and diplomacy. It even contains a nice twist: the entities originally claim to be the ghosts of a crashed Federation starship given form, but they are eventually revealed to be alien criminals instead, their essences ripped from their bodies as a punishment.

With such a straight-forward script it comes down to director David Livingston to do the heavy lifting, and he does a pretty great job of it. The action works. The suspense works. The pace keeps everything rattling along in a wonderful fashion. You would not want The Next Generation to be like this every week, but once in a while it becomes a great diversion.

This is the 11th good episode out of 15 for Season 5, bringing the quality ratio up once more to 73 per cent. This is a really enjoyable year for The Next Generation.
Posted by Grant at 7:41 AM