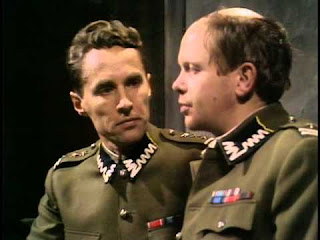 It is 4 January 1973, and time for another episode of Colditz.

A body of a murdered German guard is found in the parcel room. The Kommandant (Bernard Hepton) is keen to write the death off as a suicide, lest the Gestapo investigate and take over the running of Colditz. The British prisoners, however, know that if the Gestapo do suspect a murder, they will execute ten prisoners as an act of punishment. They therefore begin a murder investigation, to ensure that when the time comes there is a proper guilty party to serve up to the authorities.

"Murder?", the second episode by The Sweeney creator Ian Kennedy Martin, marks yet another change of tack for the series - now managing to present a murder-mystery inside a German prisoner-of-war camp. It is an unexpected and very welcome change, and tells a fast-paced and gripping story in which Carter (David McCallum) and Carrington (Robert Wagner) have to play detectives under the noses of their German captors.

McCallum and Wagner make a great pairing, and it has always been great television whenever the series has put them together. Here they work excellently essentially as a pair of police officers working a beat: the only difference is that the beat is a military prison. They follow leads, interrogate suspects, develop and test working theories, and leave traps to draw out the guilty party. Part of the delight of the episode is seeing how well they play off one another. The other part is just the sheer beauty of not only playing a crime story inside Colditz but making it work as well as it does.

When the murderer is eventually found the episode enters into a surprising third act as Colonel Preston (Jack Hedley) interrogates the prisoner as to why they did it. The man's calm, self-satisfied answers are pretty much the most deeply disturbing thing presented in the series so far. It also opens a can of worms in terms of precisely what to do next: the Gestapo are willing to accept the suicide story, so there is no reason to give up the murderer to the authorities. At the same time, it was not an act of war but cold-blooded murder: how do you continue to live with a murderer sleeping in the next bunk? What do you do with them? How can you trust them? It is a nicely uneasy and open-ended conclusion that thankfully does not fall back on an easy or convenient answer.

It continues to delight me that this series, more than forty years old, continues to offer strong, intelligent and unexpected storylines with every passing episode. It really is one of the best BBC drama series I have ever seen.
Posted by Grant at 7:37 AM