Colditz: "The Way Out" 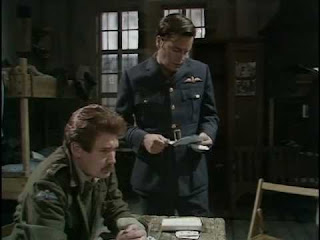 Lieutenant McDonald (Prentis Hancock), a red-haired Scottish officer, receives a "Dear John" letter from his wife, who has become pregnant to another man in his absence. Recognising his upset, the escape committee negotiate to have him join an imminent French escape attempt, despite resentment from the British officers whom he is overtaking in the queue.

"The Way Out", while not a bad hour of television in its own right, feels like a weaker instalment of Colditz. The originality and depth that marks many of the other episodes simply do not seem in evidence here. It also focuses a little too much on its guest actor, turning it into an episode where the regular cast have precious little to do but work around the sidelines. That would be okay if the guest character was a good one. Sadly, and despite the best efforts of actor Prentis Hancock), Lieutenant McDonald feels a little too much of a stereotype. He is a weak core that leaves the episode struggling to hold together.

Part of the problem with McDonald is that he is quite difficult to like. He is moody and withdrawn, even before he receives the sad news that his wife is leaving him. He acts abrasively to his fellow officers and sullenly keeps to himself. While it might represent an accurate depiction of many prisoners-of-war, it does not lend itself well to engaging drama. Where the script picks up is in the way it leads Carrington (Robert Wagner) to befriend McDonald, but oddly their scenes together only seem to work in one direction - Carrington gets depth and entertainment value, and McDonald continues to be a drag in his own episode.

It seems inevitable that McDonald's escape attempt will fail, and indeed he gets fatally shot while struggling through a barbed wire fence. The episode's best moments come in its final minutes. The Kommandant (Bernard Hepton) is genuinely angry and upset, summoning Colonel Preston (Jack Hedley) to his quarters for a fierce upbraiding. At the episode's end he quietly reads a letter left by McDonald to his wife, and orders that all of his letters and possessions be dispatched immediately to the wife. There's a wonderful dignity to Hepton's portrayal of the Kommandant. He is not a Nazi, but he is a patriot, and that brings with it a sort of weary sadness and a strong desire for his prisoners to simply be peaceful and wait out the way without incident. Seeing McDonald shot clearly gives him no pleasure whatsoever - only recriminations and regret.

Like many episodes of Colditz, "The Way Out" is based on a true story - in this case army Lieutenant Michael Sinclair, the only British soldier to be killed during a Colditz escape attempt. A German shot intended to wound him while running ricocheted off his elbow and pierced his heart. He was buried by the Germans with a seven-gun salute and his coffin decorated with a hand-made British flag. In 1947 his body was moved to Berlin's war cemetery. He was posthumously awarded the Distinguished Service Order - the only British soldier to be decorated for action in captivity.

"The Way Out" is perfectly watchable, but by following so many great episodes it cannot help but seeming a bit of a disappointment.
Posted by Grant at 10:37 PM