Star Trek: The Next Generation: "The Wounded" 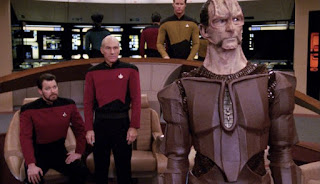 The Enterprise is called in to help when a Starfleet vessel, the USS Phoenix, goes rogue and starts blowing up starships within the Cardassian Union. While Picard (Patrick Stewart) attempts to track the Phoenix down and bring its captain to justice, Miles O'Brien (Colm Meaney) is forced to face his own antagonism towards the Cardassians.

The birth of Deep Space Nine continues. Last episode Chief Miles O'Brien received an unexpected burst of character development and gained a wife. This week that development continues, fleshing out his back story and introducing the Cardassians - the alien civilization that will come pivotal to Deep Space Nine. Now I don't think for a second these episodes were developed with a sequel series in mind, but in about a year's time when Deep Space Nine is being put together they clearly became key influences. I do wonder if there was talk about signing Colm Meaney up as a Next Generation regular: there was some work done towards replacing Wil Wheaton with a new actor, most likely a female helmsman, but it does seem reasonable that boosting O'Brien's profile may have crossed executive producer Rick Berman's mind.

As noted above, the Cardassians make their debut here. In time they became one of my favourite alien species on Star Trek. Here they exist in a prototypical form. Their culture isn't really defined beyond being aggressive and militaristic. Their costumes get a significant reworking by their second appearance in Season 5's "Ensign Ro". What's surprising is that their signature starship debuts here, effectively fully formed, as does their cobra-like facial appearance. Admittedly Gul Macek (Marc Alaimo) sports facial hair, something that's never seen on a Cardassian again, but that's about it as far as make-up changes go. It is slightly strange to see Marc Alaimo play Macek, since he goes on to play a different Cardassian - the infamous Gul Dukat - in 35 episodes of Deep Space Nine.

It's quite nice to see Keiko O'Brien (Rosalind Chao) make a return appearance immediately after her first, tying this episode into the last to show how O'Brien is adjusting to married life. It's slightly odd to see an episode based so heavily around a guest performer - usually an episode like this would focus on Riker, or Worf maybe. Instead it explores how O'Brien's experience during a Federation-Cardassian border war led to him killing a man and holding a racist anti-Cardassian grudge for the last five years. Colm Meaney plays the scenes well, but it is a bit weird to spend this much time at once with what has been such a small supporting character. It's weird to properly meet him by learning he's a bit racist.

Marc Alaimo is excellent as Macek, portraying a man who may have once been at war with the Federation but now is simply an honourable and dedicated professional. There's not a point in the episode where he doesn't seem to be a reasonable man, with an understandable grievance. It's a wonderful performance.

The episode's second half, once the Phoenix has been apprehended after murdering 650 Cardassians in two destroyed starships, is a massive disappointment. There's simply no real effort made to explain the actions of rogue captain Benjamin Maxwell. He believes the Cardassians are re-arming for a fresh assault against Federation colonies, yet despite an apparently glowing reputation he abandons any attempt to warn Starfleet and flies in fighting. It beggars belief. It make little sense that he would order such attacks, and it makes even less sense that his entire crew would go along with such orders. The episode presents horrifying war crimes, and then reduces them to a few surly conversations between Maxwell and Picard.

"The Wounded" is going to always have a small place in Star Trek history for introducing the Cardassians, but on its own merits it feels like a poorly judged misfire. The aspects that feel the most important are rushed, and the aspects on which it lingers are weirdly selected and insufficiently engaging. It's the sort of episode that could be easily skipped, and that makes it a difficult one to bother recommending. 12 episodes into Season 4 and nine have been good. The quality ratio drops back down to 75 per cent.
Posted by Grant at 7:49 AM