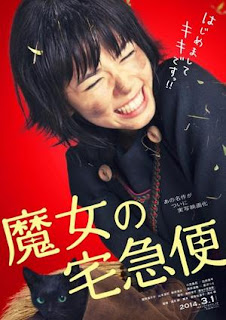 Mention Kiki's Delivery Service and the mind turns understandably to Hayao Miyazaki's delightful 1989 animated film. What many Studio Ghibli fans might not realise, however, is that Miyazaki's film was an adaptation of a hugely successful children's novel: Witch's Express Home Delivery, by Eiko Kadono. That book, which was published in 1985, was ultimately popular enough for Kadono to write four sequels - the most recent in 2009.

Given the overwhelming prominence of Miyazaki's animated adaptation on Japan's pop culture landscape, it actually seems quite a provocative move by Kadokawa Films to produce a new live-action film. It's immediately going to suffer comparisons with the earlier movie, and given the extraordinary quality of that earlier work it's a contest that the new film is going to lose.

In some respects that's a shame, because this new Kiki's Delivery Service is a breezy, broadly entertaining children's fantasy with a lot to recommend. It's not perfect, but it does deserve a better chance than a lot of online critics appear to be giving it.

Kiki's Delivery Service follows the adventures of a 13 year-old witch-in-training named Kiki, who as part of her apprenticeship must spend a year on her own in a town with no other witches. She chooses to work as a delivery service, using her flying broomstick to travel quickly across a small chain of islands. While trying to settle in, she faces unexpected difficulties and local prejudice against witchcraft.

The film is directed by Takashi Shimizu, a quite strikingly odd choice given his long successful career as a director of horror films. He remains best known for kicking off the lucrative Ju-on/Grudge franchise, including directing both the original theatrical film and its American remake. He's working with a considerably different tone and colour palette here. It's no surprise to find this is the most colourful and upbeat film he's ever directed. He now joins a growing number of Japanese directors demonstrating an ability to direct for an extraordinarily wide range of films and genres. With all due respect he's not quite there - there's a slightly awkward quality to the film that he never fully shakes off - but for a change in style and tone it's a pretty impressive achievement.

Fuka Koshiba makes a bright and likeable impact as Kiki, although she does seem a little too old to be playing the 13 year-old witch-in-training. It's a broad performance in a film filled with similarly big, exaggerated ones, and in the context of the film it works remarkably well. This is her feature film debut, which makes her performance here even more impressive. Slightly less impressive is Ryohei Hirota as Tombo, a young mechanic with an aspiration to build his own aeroplane. He's oddly surly and occasionally actively belligerent, but this does seem to be more a problem with the screenplay than with the actor. There is a nice chemistry between the two characters by the end, but it's a long time coming and would have benefitted from being pulled together a little earlier.

The storyline is an episodic affair, which matches its source material: Shimizu and Satoko Okudera's screenplay draws from the first two of Kadono's novel, leading to a slightly silly climax involving transporting a sick baby hippopotamus by broomstick. It hits some effective emotional beats, but I strongly suspect adult and teenage audiences will find the sequence too twee to accept. Other parts of the film are much more effective.

The story also strains the production budget a little too much. Scenes of Kiki flying on her broomstick are generally effective, but occasionally look a little fake and outdated. The computer-generated effects used to create the sick hippopotamus and Kiki's talking cat Jiji are fairly awkward and unconvincing. It's in the representation of Jiji that this live-action film will suffer the worst comparisons to Miyazaki's anime. In that version the character was an absolute highlight in both the original and Walt Disney Pictures dubs. Here, voiced by anime performer Minako Kotobuki, Jiji is rather underwhelming. It also feels as if budget considerations sideline the character for much of the film.

There's a lot to criticise here, but it also can't be denied that there is a bright, optimistic energy to Kiki's Delivery Service. Fuka Koshiba drags the film along with enthusiasm and warmth. I enjoyed this film a lot, sometimes justifiably and sometimes against my better judgement. If you can move past Miyazaki's shadow, and take it on it's own merits, it's an uneven but joyful delight.
Posted by Grant at 10:37 PM