The Pull List: Best Comics of 2015 Not Elsewhere Classified 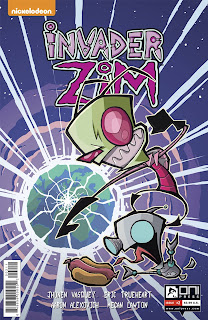 It seemed a decent enough plan to recount my favourite comic books of the year by splitting them by genre. One post for superhero books, one for science fiction, and one for fantasy and horror. The problem with this approach is that it left a pile of other books I really enjoyed in 2015 but which didn't fit easily into any of those genres.

As a result, this is the collected "other" books: the ones that I really enjoyed, but which simply didn't fit easily anywhere else. It includes comedy books, two TV cartoon tie-ins, comics written for children, and a work of historical fiction.

It's great that comic books have become such a diverse field in recent years. At this point it feels as if any lack of variety is due more to my spending habits than to any deficiencies in the industry.

One more time: let's kick off with the runners-up, before shifting to my top three.

Jem and the Holograms

It really is rather odd that 2015 saw 1980s cartoon Jem and the Holograms get re-imagined twice. The first was a reportedly dreadful feature film - it is yet to be released in Australia - that abandoned most of the original content in favour of a bland aspirational pop singer drama. The other was an inspired re-imagining by Kelly Thompson with jaw-droppingly strong character designs by artist Sophie Campbell. It's an all-ages book, it features a huge number of strong female characters, and it provides a deeply respectful yet fresh update of a pop culture classic. This book was a pleasant surprise.


2014's break-out all-ages hit continued in 2015, moving well beyond its original eight-issue remit to become a great ongoing book. Lumberjanes follows a group of five girls on summer camp having adventures with a dazzling variety of monsters, witches and otherworldly occurrences. It's not just the breezy tone or the adorable artwork that makes Lumberjanes sing; it's also the strong feminist undercurrent. This isn't just a fun book - it feels like an important one. Even a change in creative team didn't stop it from hitting its stride.

Some years ago Brian Wood wrote an outstanding long-form anthology series, Northlanders, that told stories about vikings. The tone and characters varied from arc to arc, but altogether they built up an evocative period of a period in time and a particular group of people. Now he is doing it all over again, focusing not on vikings but on the American Revolution. Rebels is an impeccably researched, thoughtful and richly entertaining ongoing series with outstanding art by Andrea Mutti - and the occasional guest. It's remarkable stuff.

Optic Nerve, Adrian Tomine's thoughtful anthology series, is a pretty slow-run series with this - the 14th issue - getting published on the 20th anniversary of the series' original issue. It may be slow, but it's an absolute gem when it arrives. Tomine is one of the legends of American independent comics, and just one issue of this book should be enough to convince any reader of that. The standout of this issue was "Killing and Dying", depicting the troubled relationship between a wannabe comedian and her father. It was simply stunning work. 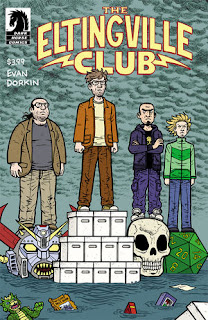 For years Evan Dorkin has produced cynical, bitter and deliberately unpleasant comic strips about the Eltingville Club, a group of frustrated, sex-starved, mean-spirited teenage comic book fans. In 2015 we finally got the second issue of his final-ever Eltingville story, that jumps forward to adulthood to see how the boys changed - or didn't - in the years following an acrimonious break-up. Dorkin's bold black and white artwork is always fantastic, as are the ridiculously large number of pop culture references, but it's just how far out on a limb he is prepared to take the characters that impresses me the most. By and large these are horrible people, and it's a peculiarly harsh comedic world that he has constructed here. Who can say if this is the actual final story he writes about the club, but in narrative terms this really is their last adventure - and it's a perfect send-off for them. 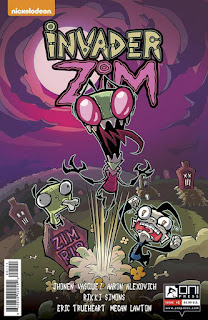 Invader Zim was a perfect cartoon produced by Nickelodeon last decade, and it was created and designed by independent writer/artist Jhonen Vasquez. This new follow-up comic from Oni Press has benefitted from Vasquez's direct involvement - he not only supervises the storylines but adds additional dialogue - as well as a creative team drawn from the cartoon's original production team. Tie-in comic books come and go, but few so accurately reflect their source material. This doesn't simply feel like an adaptation of Zim. It feels as if Zim is back, jumping from one medium to another but still offering the exact same kinds of stories and characters. Sure I have a lot of nostalgia invested in this property, but I wouldn't be honest if I didn't rank it this highly. Few comics this year have entertained me quite this much. 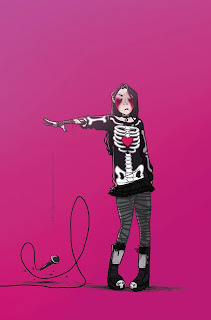 Giant Days is simply wonderful stuff. The book follows three young women starting off at university together and boarding in the same residential hall. The comedy is character-based, warm and appealing, and readily identifiable to any readers who went through their late teens and early 20s. The book is written by noted webcomic creator John Allison, with artist Lissa Tremain getting replaced by Max Sarin when Boom extended the book's run from six to 12 issues. Once again it's a book with strong, appealing female protagonists. If there's a theme I have noticed in American comics this year, it's the manner in which publishers have embraced a female readership to a degree I don't recall seeing before. Not just here, but among superhero titles with Batgirl, Black Canary, Spider-Woman, Spider-Gwen, Squirrel Girl, and Ms Marvel, and more diverse books like Revival, Saga, Jem and the Holograms, The Spire, Lumberjanes and many, many more. It is a welcome development that I've been happy to embrace. Fingers crossed the trend to better diversity - in gender, sexuality, race and religion - continues strong in 2016.
Posted by Grant at 10:42 PM