Doctor Who: "The Beast Below" 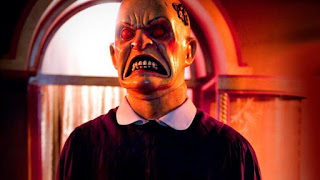 For her first trip in the TARDIS, the Doctor (Matt Smith) takes Amy (Karen Gillan) in the future and to the Starship UK, a giant city-ship containing the population of the United Kingdom after the Earth was ravaged by solar flares. As soon as they arrive it's clear something is going wrong, but finding out the truth leads them to a terrible dilemma. The fate of the British people lies in the Doctor's hands.

Back when it first aired I wasn't tremendously impressed with "The Beast Below". It felt too rushed and half-formed, and pitched at a younger age bracket than the series had been doing up to that point. I'm now coming back to it five years later, and while I still think it's a little undercooked I do find myself appreciating it an awful lot more. It's an oddly old-fashioned episode in many respects, and a little out of place. You could pull out Matt Smith and Amy Pond and replace them with Sylvester McCoy and Ace, shoot in cheaply in Television Centre in 1988 and it would arguably be a more effective story for it.

The episode has a great central premise: the Starship UK only flies through space because it's strapped to the back of an enormous space whale. To keep it moving the starship's founders wired up the whale's brains with electrical charges. So the whale lives in constant agony, and the starship remains viable. Any citizen who figures out the truth may either vote to forget they found out and have their memory erased, or vote to protest - and get fed to the whale. Once enough citizens protest, the system will be shut down, the whale will be freed and everyone on Starship UK will likely die.

As I said, it's a great premise. The execution feels a little truncated, as if either there simply wasn't enough written to make it work or something went wrong during production. It's a shame, because all of the ideas are pretty good: the creepy Smilers in booths, a gun-wielding black Queen Elizabeth X, the Doctor and Amy getting vomited out of the mouth of a space whale, and so on. These elements simply don't quite gel together. The Smilers in particular are a neat conceit that simply don't have anything to do. It's a pity they weren't saved for another episode.

Sophie Okenodo is wonderful fun as "Liz 10", the monarch of the future United Kingdom. It's one of those relaxed sorts of performances where the fun the actor is clearly having in the part rubs off on the audience. It's a shame the character hasn't been used again beyond one cameo later in this season. Hannah Sharp is also strong as Mandy, a schoolgirl whose own circumstance draws the Doctor and Amy into the story. Once again she feels under-used: established, but then never really utilised.

So if all this episode comprises is failed potential, why enjoy it at all? It basically comes down to Matt Smith and Karen Gillan to save the day. Their chemistry as the Doctor and Amy are flawless, and wonderfully enjoyable. Their dialogue sparkles, with plenty of funny lines and moments of character. It's a great episode for Amy, who shows not only an ability to cope with the dizzying strangeness of time travel but also effectively saves the day by recognising things the Doctor hasn't even noticed. For his part Matt Smith is given a powerful and angry speech for the episode's climax, but it's a speech he doesn't quite manage to pull off. It's his first chance to show an angry Doctor, and unfortunately he comes across as a little too young and thus a little too petulant. He'll get there - he's not there yet.

This is an episode with a lot of problems, problems that likely could have been fixed with a rewrite. I suspect time may have got the better of the production team here. Much of the season was shot out of chronological order, so while this episode was broadcast second it was produced after a weeping angels two-parter and a Dalek story, and immediately preceded recording of "The Eleventh Hour". It seems things got dropped in the rush. There's still much to recommend here, and a lot of enjoy - just with a few reservations.
Posted by Grant at 4:55 PM