Star Trek: The Next Generation: "The Nth Degree" 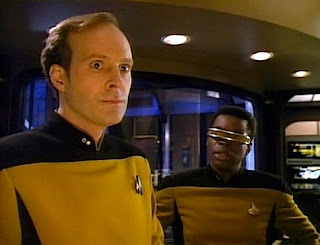 After the Enterprise comes into contact with an alien probe, Lieutenant Reg Barclay (Dwight Schultz) starts to experience an accelerated increased in his IQ. As his powers grow far beyond that of any human being in existence, he begins to present a threat to the Enterprise's safety.

Back in Season 3 The Next Generation ran an unexpected single-episode experiment where the regular cast were sidelined in favour of a one-off guest character: Reg Barclay, an under-confident and awkward junior engineer, whose frustrations with his superior officers led him to create a fantasy world on the holodeck. The episode was a hit both with the production team and with viewers, so it's no surprise to see them return in Season 4 to revisit the character. It does feel a bit different this time around, however, I suspect because in his first appearance Barclay was created to service a narrative whereas this time around the narrative has been created to service Barclay.

It's nowhere near as successful as his first appearance pretty much for this reason. There's a weird sense that it's all a bit too contrived around Barclay. He worked very well back in "Hollow Pursuits" because the storyline allowed him to be quite a pathetic and lonely figure. Here he has been repositioned more as a humorous character, and a slightly irritating one at that. Dwight Schultz does as good a job as he can - and he's a great actor -  but to be honest the script works against him. There's a sense that we're laughing at him in the early scenes, when we used to sympathise with him instead. Once he gets transformed by the Cytherian probe and becomes a confident super-genius, he's a little less cringe-worthy to watch but a lot more difficult to like. Basically the character cannot win.

Overall the episode cribs heavily from Daniel Keyes' noted science fiction short story "Flowers for Algernon", except that in the context of Star Trek it lacks the dramatic punch. Had Barclay's accelerated evolution resulted in a fatal burn-out at the episode's end, we might have had something really worthwhile. Instead the episode pulls its punches, and winds up with an amiable conversation between the command crew and a giant disembodied, rather jovial head. Barclay is returned to his former state, so that his crewmates and the audience can be free to mock him again.

There are some highlights - generally little moments of character. La Forge (LeVar Burton) gets more than a little annoyed that Barclay becomes a superior engineer to him so quickly. Troi (Marina Sirtis) is pleasantly touched by Barclay's sophisticated romantic overtures, while Riker (Jonathan Frakes) is hilarious when he reacts to the news of Barclay's attempts to chat her up.

This isn't a bad episode. It does rigorously play things safe, and for pretty much every creative decision that is made there's a better alternative nearby. How much any given viewer enjoys it will boil down, I suspect, to what they think of Lieutenant Barclay. I'm personally not a fan - not past his Season 3 debut anyway - and this has impacted on my own feelings a bad. "The Nth Degree" is good enough to sneak over the line into "good", but it's closely-run thing. 13 good episodes out of 19 give Season 4 a quality ratio of 68 per cent.
Posted by Grant at 3:45 PM