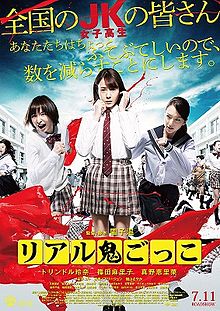 Sion Sono really seems to be out to claim the title of Japan's busiest film director. He kicked off 2015 by directing the made-for-television movie All Esper Dayo! SP, and followed that up with the theatrical releases Shinjuku Swan, Love & Peace, Tag, The Whispering Star and The Virgin Psychics. You didn't misread that: five feature films and a TV movie, all in one year.

So in the middle of that flurry of activity we have Tag, a genre blend of horror, thriller and fantasy. It begins with a schoolgirl named Mitsuko (Reina Triendl) on a bus to summer camp. Within about a minute and a half pretty much everybody around her is dead, and she's running for her life. The film lasts about 85 minutes and, excluding the closing credits, she's pretty much on the run the whole time. To explain the film any further would be to ruin half of the surprise.

The film is an adaptation of Yusuke Yamada's novel Real Onigokko, which has already been adapted into a series of feature films in recent years beginning with 2006's The Chasing World. Sono takes maybe half of the premise of Yamada's novel and uses it as a springboard for his own story. The result is something that echoes the original without actually resembling it very closely at all.

A lot of what happens in Tag makes little sense until the film's final act. Mitsuko starts off running down a forest highway, but before long she finds herself as a completely different schoolgirl in a completely different school. Before long she's a third woman about to get married, and so it goes on. The segues from one reality to another are deliberately swift and seamless, giving the film an extraordinary effect of watching somebody else's dream. There's logic to what's going on, but only a dream-like logic. It is shot beautifully with a fluid camera and a lot of variations in how scenes are presented. The musical score is highly prominent, but doesn't get in the way of the dialogue. There's a sort of Danny Boyle vibe to many of the film's scenes; I have no idea if this was intentional or not, but it felt as if the influence was there.

The further the film goes the more urgent the need for an explanation becomes. It does arrive in the finale, which actually explains more than I had expected. It's difficult not to notice that there isn't a single man to be seen for the film's first hour - that absence actually has a reason. The film is also peppered with gratuitous shots of the characters' underwear, including more than one scene of a character stripping down to bra and underpants - that too actually has a narrative reason for being there.

It creates an odd effect: a film that spends the majority of its time being a leery sexist horror film catered mostly for a male gaze, that then becomes a defiant rejection of that same gaze in the climax. It all makes Tag an odd film, one that objectifies women and then suddenly points an accusatory finger at the objectifiers. To be honest the film's climax doesn't quite work and certainly feels terribly under-developed compared to the rest of it, but taken all together the film has a great deal to recommend it.

Reina Triendl does a very good job as Mitsuko, playing an admirably broad range of responses to what is essentially non-stop psychological trauma. Also memorable is Yuki Sakurai as Aki, Mitsuko's best friend who constantly re-appears in every new dream-like scenario into which she stumbles.

Tag is a short, shocking explosion of violence and tense drama. It's regularly confusing, deliberately over-the-top, sometimes inappropriate but consistently entertaining. While it's far from faultless, it features plenty to recommend it. It seems Sion Sono is on a roll at the moment. Long may it continue.
Posted by Grant at 9:58 AM