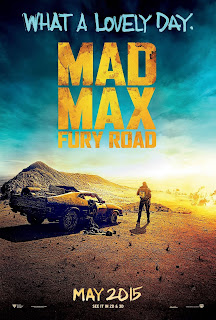 I have never been a particularly keen fan of the Mad Max films. It's not that I don't appreciate their quality - it's eminently possible to appreciate the quality of art without actually enjoying it. For whatever reason, and despite being a fan of both action and science fiction, I have never emotionally responded to explosive car chases through deserts with angry men wearing funny leather costumes. Call it a blind spot if you like, or a personal failing. Mad Max has simply never been my cup of tea.

It was quite a surprise to see director/producer George Miller's interminably delayed fourth film Mad Max: Fury Road actually get filmed and make it to cinemas. He had been developing it for so long that it was originally going to star original Max actor Mel Gibson. What was even more surprising was how well received this fourth film was. It was a reasonable commercial hit, but critics went crazy for it. The National Board of Review even named it the best film of 2015. Reliable friends were telling me it was an amazing film, and a cinematic master work. Despite not really caring about the franchise in the slightest, the sheer weight of acclaim made me feel obliged to give it a shot.

It's a quality film, boasting exceptional action, stunning photography and a strong female co-protagonist. It builds its fictional world in the margins, allowing it to enhance the story while not getting in its way. It expresses all character through those characters' actions, in what is pretty much an unparalleled case of showing and not telling. It has been cannily cast, making great use of both Tom Hardy as Max and Charlize Theron as co-lead Furiosa. It knows when to use computer-generated imagery to enhance the visuals and when to allow real-world stunt work and pyrotechnics to take centre stage. It really is the action masterpiece that many of its fans are claiming it is.

On the other hand, it is still an explosive car chase through a desert with angry men wearing funny leather costumes. The bottom line is that you can do everything right, and tell the absolute best story that you can, but if the viewer's taste doesn't run for what you're making then no number of rolling cars and impressive leaps from roof to bonnet is going to change that viewer's opinion. It's not George Miller's fault that I didn't entirely warm to his film, and it's certainly not my fault. It is what it is - a difference in taste. I can see a lot of people adoring this movie, indeed I've met several. I can also see a lot of people catching up with it on DVD or download and wondering whatever the fuss was all about.

Where I do think the film excels is in the way it creates a very simple structure - the plot basically entails driving very fast in one direction, and then driving very fast back the way they came - and then populates it with a huge amount of open-ended, evocative characters and situations. We enter the film with Furiosa's story already established and running. We meet Max as he's captured by the bald, cancer-ridden War Boys and taken to the Citadel of the aging warlord Immortan Joe. Everything in the film - Max's story, Furiosa's mission, Joe's origins and the War Boys' viking-inspired religious culture - we glean from short bursts of dialogue and visual imagery. There's a beautiful and eerie moment well into the film where Max and Furiosa's truck drives through a marsh populated by silent men crossing the swamps on stilts. We never get told who these old men are, or why they wander the swamp. Miller leaves it for us to imagine our own story. All of this implied depth and detail enables the audience to concentrate on whatever elements work best for them as an individual: it can be a different film for different people.

It's actually quite a hard job to deliver a strong performance in an action film, since so much of what actors do to express character usually relies on dialogue. Here they mostly have to rely on how they engage with the action. Theron plays Furiosa as a stone-cold professional, right up to the point where her plans become irreparably unhinged - then there's suddenly a wave of depth and emotion that actually enhances and illuminates everything else she's said and done to that point. Tom Hardy wisely carves out his own niche as Max, effectively ignoring what Mel Gibson brought to the role in the original three films. For me the real highlight is Nicholas Hoult as the rejected and dying War Boy named Nux. He has help - his is the most obvious and traditional character arc in the film - but he blends humour with some really effective vulnerability.

I've seen the film described in many places as Furiosa's story, although to be honest I think that sidelines Max an awful lot more than the film itself does. He is our viewpoint character, and as such it is largely Max's story, but Furiosa gets enough material that it's easy for an audience to watch it as her film. Like I said: this can be a different film for different people. To be honest I think it's Nux's film as much as it is Max's or Furiosa's. There's been a lot written about how the film presents a fiercely feminist story, and I suppose that to a large extent it does. It's not a perfect example, however, with Immortan Joe's captive brides looking a little too much like bored supermodels in a desert and seemingly constructed a little too much for a heterosexual male gaze.

The action is exceptionally staged and presented, although for me personally the sheer quantity of car chases exceeds their variety. Miller also over-uses a technique of dropping frames to make the action look faster and more violent. Used sparingly at it might have worked. Used to the extent he does here and it becomes a bit of a chore by the climax.

This is absolutely a film worth watching. Fans of the original trilogy - to which this is neither a sequel nor a remake - will enjoy it a great deal. Viewers looking for a quality action film or a strong female protagonist will also find a lot to enjoy. In the end any criticisms I have are comparatively minor. If you like this sort of thing, it's pretty much the best you're ever going to see. If, like me, you've got a bit of a threshold for car chases and have heard nothing but gushing praise for this film all year, you may wind up a little bit underwhelmed. It's an outstanding film, but not everybody's cup of tea. And that's okay.
Posted by Grant at 9:55 AM