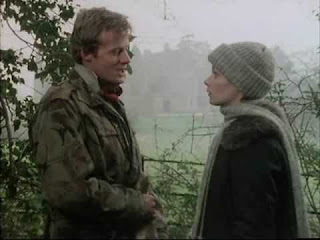 When Abby (Carolyn Seymour) hears word of some boys living in a nearby country estate, she abandons her friends in the night and drives to find out if one of them is her missing son. Once there she stumbles into a violent conflict between the group of men who have assumed control of the estate and Jimmy Garland (Richard Heffer), the charismatic army veteran who actually owns it.

On initial inspection "Garland's War" seems like a great episode of Survivors. It throws Abby into the middle of an ongoing cat-and-mouse game between Garland and the group of men that have violently supplanted him from his own home. It provides some action, a few surprising twists, and even a light touch of romance between Garland and Abby. Unfortunately the moment the viewer begins to think about what they've seen the entire episode falls apart.

What the episode essentially does is cheat. If we strip away everything but plot what we find is a situation where a collective of 20-odd men, women and children have occupied a large, easily secured and fortified manor house. The owner of the house, a land-owning aristocrat, wants them to move into the cottages and farms along the edges of his territory and start farming the land for him. Viewed purely based on that information, it is abundantly clear that the community are in the right and that in a post-apocalyptic scenario the landed gentry are going to have to get into the mud and work alongside everybody else. By his own admission one of Garland's chief objections to the group he's fighting is that they won't let him be the automatically appointed leader.

As I said, though, the episode cheats. Garland is played by Richard Heffer as a dashing and attractive romantic lead, full of humour and grace and boyish enthusiasm. He's positioned as a love interest for Abby. When we first meet him he's being chased down by a pack of men armed with shotguns. While his position may be wrong, and his strategies repellent - he has taken to taking pot-shots at farming civilians to scare them off - the episodes goes out of its way to convince us he is a hero.

Over on the other side we have the 20 people who have moved into Garland's enormous house. We are told there are more than 20 people there including women and several children, but with one or two exceptions all we ever see are surly men bearing shotguns. They growl, they mutter and they intimidate. Their leader Knox is played by Peter Jeffrey, an actor purpose-built to sneer and look untrustworthy (in Doctor Who he plays Count Grendel in "The Androids of Tara"). The episode deliberately holds back anything that might humanise these characters. Anything Garland does that reflects poorly on his character is done off-screen and prior to the episode beginning. Anything Knox and his followers do that reflects poorly on them is done in full view and on-screen. The deck has been deliberately, and oddly, stacked to lead the viewer into barracking for the wrong side.

There is a point about two third through the episode where it looks like a reversal is about to take place: that Abby will realised Knox and his community are the good people and that Garland is an arrogant, violent thug. Then it unexpectedly swings the other way, and keeps the audience backing Garland right to the end. It is disappointing and dishonest television.

We're six episodes into Season 1, and we've finally hit our first bad episode. Still, with five good ones the quality ratio is still an impressive 83 per cent.
Posted by Grant at 9:03 PM