Star Trek: The Next Generation: "The Host" 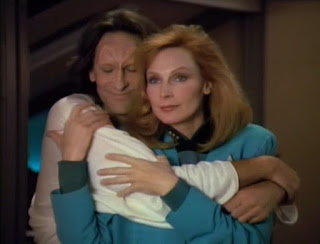 While the Enterprise delivers the Trill ambassador Odan (Franc Luz) to a growing crisis on Peliar Zell, During the journey Dr Crusher (Gates McFadden) and Odan have embarked on a passionate lover affair. When a terrorist attack mortally wounds Odan, Crusher is shocked to discover the secret of his species - an intelligent worm-like symbiont that may be transferred from one host to the next. With a new Trill host unavailable, the Odan symbiont is transplanted into Commander Riker (Jonathan Frakes) - but can Odan and Crusher's romance continue under such unusual conditions?

In terms of Star Trek history "The Host" will always be known for introducing the Trill, a symbiotic species comprising a succession of humanoid hosts and a centuries-old worm-like creature that sits inside their abdomen. Deep Space Nine will draw a huge amount of story and background detail from the regular character of Jadzia (later Ezri) Dax. The Trill presented here, Odan, bears little resemblance to that later take on the Trill concept. Here his species is a mystery to the Federation, they are unable to use a transporter in case it kills the symbiont, and there's nary a spotty neck to be seen - just a standard generic lumpy alien head.

While there is a peace negotiation for Odan to oversee, the bulk of this episode is taken up by Odan and Crusher's romance. In an ill-advised piece of scheduling it comes straight after another romantic episode, "Half a Life", and to be honest it suffers a little in the comparison. For one thing at the time of shooting Gates McFadden was about eight-and-a-half months pregnant, meaning it is a passionate love story in which the lovers can only ever been seen from the shoulders and above. For another it swaps the delicate, gentle torment of "Half a Life" for genuinely strange science fiction weirdness. How can you continue loving somebody if their personality stays the same but their entire body changes? Crusher gives it a red-hot go with Odan inside Riker's body - and that brings a question of consent that's never addressed one way or the other - but draws the line when Odan's permanent host turns up: a woman named Kareel.

I remember when this episode originally aired there were accusations of homophobia that Beverly Crusher, an enlightened woman of the 24th century, would pursue a romance from one male body to another but then abandon her lover once it was housed inside a woman. Watching it almost 25 years later and it's clear that Beverly simply cannot cope with the inconsistency, and her reluctant admission that while she still loves Odan she cannot be with her any more is pretty much the best scene that Gates McFadden has performed. The problem the episode has with accusations of homophobia stem not from the episode in isolation but in the series as a whole.

Star Trek is, at its best, an allegory about social issues. Only one week earlier an episode used science fiction trappings to hide a discussion about care for the elderly and assisted suicide. The original Star Trek series covered numerous angles on racism and race relations, the Cold War, and colonialism. By the early 1990s there was one major social issue that seemed hot in American culture in general, yet weirdly absent from Star Trek: the question of sexual diversity. It seemed an obvious angle for The Next Generation to tackle, yet it continually shied away. When the series got close, it consistently managed to screw it up. I will tackle issues with the Season 5 episode "The Outcast" in due course. I have already reviewed Deep Space Nine's "Rejoined" and Enterprise's "Stigma" (a very poorly thought-out allegory on the AIDS crisis that came out on the wrong side and about two decades too late). Suffice to say The Next Generation finished in 1994 with the most obvious subject for a story carefully quarantined to one side. In a few episodes we'll reach "In Theory", in which Data (Brent Spiner) experiments with romancing a woman. I really regret they never made the obvious episode where he subsequently tried dating a man instead.

So in the context of a series that refuses to properly tackle gay, lesbian and bisexual issues, a scene that appears to show one character rejecting another because one of them has changed gender seems to fit in a pretty clear and unpleasant fashion. It's a pity, because "The Host" - while occasionally a little slight - is actually a pretty enjoyable episode. With 17 good episodes out of 23, the Season 4 quality ratio rises to 74 per cent.
Posted by Grant at 5:13 PM