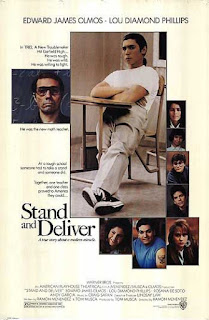 Maths teacher Jaime Escalante (Edward James Olmos) arrives at a Los Angeles high school. He's supposed to be teaching computing, but repeated budget cuts have left him to teach mathematics to a group of under-achieving rebellious teens. Refusing to give up on a challenge, he decides to not only teach them but push them to excel, facing up against his students, his school principal and the educational testing service on the way.

Stand and Deliver is a 1988 drama directed by Ramón Menéndez, who also co-wrote the screenplay with Tom Musca. In many respects it's a dreadfully clichéd film, replete with corny teen rebels, stereotypical inspirational speeches and training montages. Thankfully in other respects it's a rather uplifting and entertaining work, due to restrained direction, an authenticity of character, and a couple of really great performances in the cast.

At the centre of the film, and acting as its greatest strength, is Edward James Olmos. He plays a character here quite unlike his other works. Escalante is a little awkward, with a bad comb-over and a small physicality. He sort of stumbles and mutters his way through the classes, making embarrassing jokes and pressing the buttons of the class' biggest trouble-makers. He looks all the world like somebody who wouldn't survive a whole day with that class, but Olmos really sells it and makes him into a likeable and inspirational figure. He convinces us that he could turn a class of miscreants and slackers around.

The other thing that makes the film work is the restraint. Menéndez skirts a line very deftly in making sure that all of the common tropes of this sort of film are there, but that they never got overplayed. Escalante is inspirational, but he's not too inspirational. He manages to get a surly gang member (Lou Diamond Phillips) to study mathematics with an eye for college entry, but importantly it turns out Phillips' character is already wanting to do that anyway. Nobody changes too much over the course of the film, and by its conclusion nobody has achieved something that feels overly unrealistic. Other elements that could have exploded into tedious moral stories, like involvement with street gangs or teenage sex, sit firmly on the side of understated realism.

The film touches outside of the confines of the classroom occasionally to great effect: trouble at home, or a confrontation between Escalante and the examiner (Andy Garcia) appointed to investigate whether or not his students cheated their exams. They give the film a broader scope but never overpower the centre of the film: Escalante's classroom.

The film's not perfect, of course. For one thing the film sides a bit too closely with Escalante. In one scene mid-way through the film a student rightfully takes him to task for making sexualised jokes at her all the time. She leaves the classroom, he follows, and when we feel he's about to - and should - apologise, he instead asks her what it is that's really making her upset. She has something too, as if the film can't bring itself to admit its protagonist's faults.

It's been almost 30 years, but Stand and Deliver remains a solid and entertaining drama with a strong Mexican-American voice. It has an admirable lightness of touch: inspiring without being doggedly inspirational, and socially relevant without hitting the audience over the head about racism in the USA. Plus Edward James Olmos, who remains one of America's best male actors, really is great to watch.
Posted by Grant at 7:50 AM