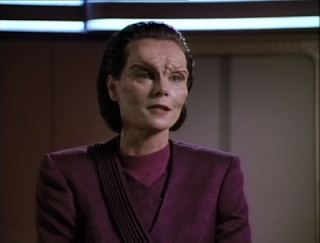 On the planet Malcor III, a man is rushed to hospital after an industrial accident. When the doctors examine him, they discover freakish aberrations in his body: organs in the wrong place, extra fingers on his hands, plus evidence of cosmetic surgery on his face. It is clear he is not a Malcorian, and before long it is discovered that aliens from another planet have been hiding in plain sight among them.

"First Contact" is a comparatively unique episode of Star Trek. While the concept of the Federation making first contact with alien civilizations on the verge of interstellar travel had been explored before, "First Contact" presents it almost entirely from the point of view of the aliens being contacted. We see the Next Generation regulars during the episode, but we see them through the eyes of the guest characters. It allows the episode to make a striking impact, and demonstrate just how shocking the unheralded arrival of the USS Enterprise might be.

The Malcorians are a deliberately familiar people, basically resembling 20th century Earth with some additional nostrils and funny hands. They're not quite the same of course, since they appear to have a global government and a unified culture - or, at least, we're never given the opportunity to see anything beyond one of their dominant nations. There's some nice culture detail dropped in around the edges of the episode: while their space program is about to expand into faster-than-light travel, there's a growing conservative voice that demands they pull back from scientific advancements and stick to an old-fashioned way of life. That resonates pretty well as a reflection of our own culture, even more than 20 years after the episode was made. That the Malcorian leadership ultimately refuses to make first contact with the Federation is a slightly surprising, but dramatically effective conclusion.

The voice of the left-wing, outward-focused part of society is Carolyn Seymour (Survivors) as Mirasta. She's desperate to explore the universe, and the arrival of Captain Picard (Patrick Stewart) and Counselor Troi (Marina Sirtis) in her laboratory is a dream come true. Seymour performs the role well, making Mirasta a very believable idealist. The use of Picard and Troi as the ones to formally make first contact also feels very believable - it's one of the best uses the series has made for Troi's role and character.

Less convincing is Michael Ensign as the paranoid and duplicitous security chief Krola, who immediately assumes the Enterprise's arrival is a pretext for invasion. While it's good to have him there to balance Mirasta's point of view, his comes across as a shrill and antagonistic knee-jerk response. It was always going to be a difficult character to write, since as viewers we know the Federation is a largely benevolent, cooperative civilization, but it could definitely have been a lot more subtle and rounded.

In the middle is George Coe as Chancellor Durken, the planetary head of state who spends most of the episode talking and negotiating with Picard. It's a great set of scenes, and Coe makes Durken a very sympathetic and understandable man. There's a nice moment of continuity where Picard shares with Durken the bottle of wine he received from his brother back in "Family": Picard promised then not to drink it alone, and he makes good on that promise here.

Despite spending most of the episode semi-conscious in a hospital bed, Commander Riker actually gets some great material. He's famously confronted by one of the Malcorian doctors, played by Cheers star Bebe Neuwirth, who offers her help in return for the chance to make love to an alien. Jonathan Frakes' awkward response is some of the best comic acting The Next Generation has had, and it plays cleverly on Riker's well-established lothario personality.

While a few moments feel unnatural and clunky, overall this is an unexpected and very satisfying episode. It's the sort of thing Star Trek can only really do sparingly - a similar story was attempted some years later in Star Trek: Voyager - but when it's done it is highly welcome. This is the 11th good episode out of 15 thus far, giving Season 4 a quality ratio of 73 per cent.

One final observation: it's odd that the Malcorians refer to their own planet as Malcor III. It's the sort of name that comes up in Star Trek all the time, but usually because a star system is colonised and the planets are all named at once. It seems weird that the Malcorians wouldn't have a name for their own world, like we call ours Earth - and not Sol III.
Posted by Grant at 6:23 PM