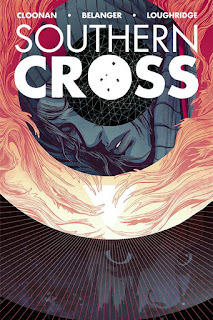 Southern Cross has been a great little science fiction horror hybrid, telling the story of a woman on a spaceship - the Southern Cross - on its way to Titan. This woman, Alex Braith, boarded the ship to solve the mystery of her sister's disappearance. Before long she was seeing ghosts, people were having visions, and the Southern Cross' journey started looking a lot less like a murder mystery and a lot more like Paul W.S. Anderson's Event Horizon.

Issue #6 ends what I assumed was a six-issue miniseries, in a typically apocalyptic and dramatic fashion. It turns out it's merely the end of the first story arc, and the fact that this series is now going to extend beyond where you'd normally find the ending is fascinating. I can't wait to see which direction Becky Cloonan takes the book in next.

Cloonan is a remarkable talent. I first noticed her as an artist, but here she's engaged purely as a writer and is doing an excellent job of it. Andy Belanger's artwork is very boldly inked, which gives the book a very distinctive look, and those inks get to play centre stage thanks to Lee Loughridge's subtle, almost monochromatic colours. It's getting to the point where Image has a surfeit of quality science fiction comic books. Southern Cross is absolutely one of them. The first collected edition is due in stores this coming January. (5/5)

Under the cut: reviews of Batman & Robin Eternal, Ultimate End and We Are Robin.

The ongoing story of Batman & Robin Eternal takes a brief pause this issue for Cassandra Cain's tragic backstory to be explained. Long-term DC readers likely already know it, and it remains pretty much the same as it was back before the New 52 - with the exception that her father David Cain now worked for this series' villain Mother. It's all pretty solid stuff, but the last-minute cliffhanger really does feel a bit unnecessary. (3/5)

Brian Michael Bendis is usually a pretty great writer. His storylines often drag for me, but they're incredibly rich in character and dialogue. Ultimate End is hands-down the single-worst comic series he has ever written. It wraps up and concludes Marvel's Ultimate Universe, but it doesn't actually show how it happens. It wastes pages on massive two-page spreads, but doesn't actually tell us anything. It gives the entire cast emotional farewells in page after page of tiny portrait panels, but it's a sort of sentimentality that hasn't been earned by story. Marvel's grand experiment in modernising its characters has ended not with a bang but with a whimper - subsumed into the company's bloated and extensively delayed Secret War crossover event. This is a terrible comic, not because of the art (which is actually pretty great) or the dialogue (from Bendis it's always great), but because it's a five-issue non-event that has cheated its readership out of their money. And that's awful. (1/5)

"Robin War" continues, as the Court of Owls force Red Robin and Red Hood to fight to the death, while Dick Grayson teams up with Jim Gordon's Batman. This is really solid, wonderfully entertaining stuff. It reminds me a lot of some of the better Batman crossovers back in the 1990s, utilising a wide spread of Gotham City characters and keeping the storyline running at a brisk pace. It's also been a godsend for We Are Robin, which started off with a great premise but a fairly weak direction. That direction seems a lot more focused and relevant now. I also really enjoyed Carmine Di Giandomenico's slightly scratchy, expressive artwork. I'd be quite happy to see him continue on this book for a while. (4/5)
Posted by Grant at 7:39 AM