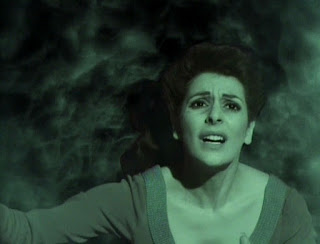 The Enterprise has been dispatched to locate the USS Brattain, which has gone missing while on a mission. When they locate the ship, they find the entire crew is dead bar one catatonic Betazoid officer. An investigation reveals that the Brattain's crew slowly went insane and murdered one another - and now the same phenomenon is affecting the Enterprise.

There's always a problem with these kinds of hallucinatory episodes, in which the characters all start to have creepy and horrific experiences that turn out to be entirely in their own minds. That problem is that there really isn't anywhere particularly dramatic for these stories to go: weird things happen for 30 minutes, and then the real problem is understood and fixed and the Enterprise goes on its way.

It's a fairly limited format for an episode, and because there's little with which to engage on the story side a lot of pressure is placed on the hallucinations to make them the interesting part of the episode. In this case those sequences aren't really up to the task - particularly some really shaky scenes of Troi (Marina Sirtis) flying through some dream nebula while talking to ghosts. The effects are unconvincing, and poor Marina Sirtis just looks uncomfortable.

Some of the hallucinatory sequences are reasonably good, like Dr Crusher (Gates McFadden) examining a body in the Enterprise morgue only to find all of the other corpses are sitting up straight around her. Others, like Worf (Michael Dorn) attempting ritual suicide because he's losing control of his faculties, simply don't work at all.

There is a fairly neat conceit at the heart of the episode: the Enterprise has become trapped in some inexplicable stellar phenomenon, as has a very unfamiliar alien ship. The aliens are trying to communicate telepathically, but all their communications are doing is robbing the human crew of their ability to experience REM sleep. As a result everybody is slowly going insane from sleep deprivation and exhaustion. The problem with this premise is that it results in a whole crew of characters basically getting sleepy and irritable, and that doesn't make for outrageously interesting television.

One day someone will write the definitive article on the sleepwear of Starfleet officers, because every time we see people sleeping in this series there's a ridiculous combination of sleepwear and bedclothes. People of the 24th century really love spangly sheets and square pillows, and wearing unusual nightclub-wear to bed. Troi's weird halter-neck blouse in her sleep scene is particularly odd - and looks kind of uncomfortable.

This is one of those episodes where you can see why it was commissioned and developed, but at the same time it's evident why it failed to work in execution. "Night Terrors" leaves us 17 episodes into Season 4, of which 11 have been good. This wasn't one of them. The quality ratio drops to 65 per cent.
Posted by Grant at 7:59 PM