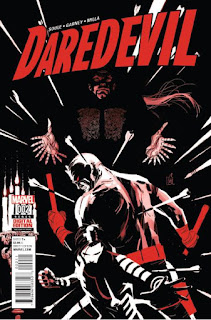 When Marvel relaunched Daredevil last month, I was not outrageously impressed. The neat blend of lighter and darker tones that had typified Mark Waid's run were gone, and the comic had returned to the bleak, miserable outlook that had dominated its storylines since the 1980s. I figured it was worth persevering for another issue, however, in case I had judged this retrograde shift too harshly. Charles Soule is a great writer, after all, and Ron Garney a great artist.

The bottom line is that while they are a sensational creative team, they are being asked to write a book that readers have seen many, many times before. This is Daredevil played safe. There are no real surprises - a new villain doesn't really count when they feel like all the villains of previous stories - and nothing to jump out and stretch Matt Murdock in new directions. It is well written and paced - although I'm not enamoured with new sidekick Blindspot - and the art is both well drawn and nicely coloured. It simply isn't that interesting. Fans craving more old-school Daredevil adventures may really dig this. I'm interesting in something with a fresher angle than this. Marvel used to have it, but with the change in volume they've taken it away. (3/5)

Under the cut: reviews of Aquaman, Doctor Who and Nameless.

I think it's fair to say that the mini-relaunch of Aquaman that kicked off in June was not the success everybody hoped for. The storyline has felt oddly lackadaisical and slow, the stakes - which should feel incredibly high - have never felt so low. The artwork in this issue is great, and it benefits from some nicely placed heroic splash pages and a guest appearance by the Justice League - although the Bruce Wayne Batman appears to be there, which makes me wonder when this issue is supposed to be set. Cullen Bunn's script, however, is simply not working. I believe there's one issue left in this storyline before Geoff Johns returns for his much-delayed final arc for the character. (2/5)

While trying to resolve whether or not his War incarnation committed a terrible crime, the 11th Doctor has come to the fringes of the Time War. While the war itself is locked away from the universe, there's still enough on the edge to put him and his companions in danger, and to point to the identity of the one who's been pulling the strings all along. This issue isn't as accomplished as the last, but it does push the story forward and into an exciting direction. I'm very eager to read issue #5 to see what shape the Doctor's ultimate enemy actually takes. (3/5)

Nameless is a bleak, violent, extremely complex horror story, in which it's often difficult to remember which parts are real and which are some horrifying, inter-dimensionally induced nightmare. This would be challenging enough, but constantly delays in the release schedule have made it even harder to keep track of what is going on. Thankfully Nathan Fairbairn's colouring makes it easier to tell the difference between action, flashback and nightmare sequence. While there are challenging ideas here, and some strong artwork by Chris Burnham, this ultimately has felt like comparatively minor Morrison: an echo of earlier, stronger works. (3/5)