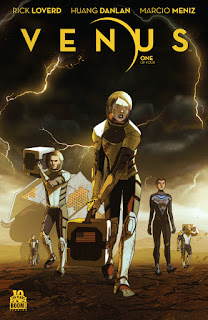 Boom Studios seem to run a really nice line in miniseries. I've really enjoyed a bunch of them this year, including Broken World and Plunder - and particularly Wild's End. It looks like they might be onto another winner with Venus, a new four-part science fiction series written by Rick Loverd with art by Huang Danlan.

Set in the mid-22nd century, the book follows an American mission to colonise Venus. An alliance of foreign powers from around the Pacific have already laid claim to the more habitable Mars, leaving the USA to do its best with the hotter, incredibly inhospitable Venus. Suffice to say that from the outset things do not go well for this critical mission.

This is a solid, well-considered first issue. It introduces a cast of characters, a dramatic setting, and raises a lot of questions to be answered down the line. If there's a major criticism it's that not quite enough happens here. It's a good set-up, but a lower panel count per page really keeps the story from kicking into high gear. Still, if you're looking for a science fiction comic with a low commitment (four issues between now and March) this is definitely worth tracking down. It has a lot of promise. (3/5)

Under the cut: reviews of Darth Vader, Robin: Son of Batman and Saga.

"Vader Down" continues, and to be honest it's just hit the stage where it's going on a bit too long. The dialogue still works, all the characters act like themselves, and the art is strong, but I feel as if it's a few too many issues of Vader, Luke, Han and Leia wandering around in the fog. A last minute arrival of a new character in the story certainly makes it more interesting for regular Darth Vader readers, but is likely to mystify those coming over from the main Star Wars book. (3/5)

"Robin War" heads into its fifth chapter with some Robin versus Court of Owls action, the return of an old Batman foe, and a shock cliffhanger to keep readers eager for the sixth chapter. This remains a really strong, old school Batman comics crossover, with a large cast of characters and a fast-moving plot that builds well from issue to issue. This week I wasn't entirely sold by Scott McDaniel's artwork, but that's more of an issue of personal taste than a comment on his talent as an artist. (4/5)

Last issue kicked off the sixth story arc for Saga, and I had naively assumed from that issue that we were in for six issues of prison life with Hazel and her grandmother Klara. Instead we're suddenly right back with Marko and Alana, a solid few years since we last saw them, reunited and on the hunt for their daughter. I cannot emphasise enough how happy that made me. I mentioned the same thing last month, but it still seems to be the case: I felt with the last two arcs that the quality of Saga was slipping a little, but in this new stage of the story it feels like Vaughn and Staples are right back at the top of their game. (5/5)
Posted by Grant at 10:59 PM