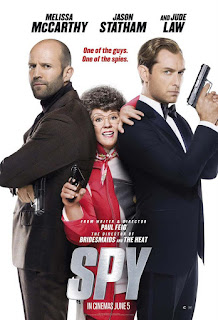 Paul Feig is rapidly becoming one of those directors whose films I will simply watch based on his name alone. While he had been an actor on American television for some time, and a writer for almost as long - he even created Freaks and Geeks - it was his 2011 comedy Bridesmaids that really made me sit up and take notice. It was gut-bustingly funny, and seemed particularly notable for using an ensemble cast of women to tell the sort of over-the-top gross-out comedy you would typically only see about men. His 2013 follow-up The Heat teamed up Bridesmaids co-star Melissa McCarthy with Sandra Bullock for a buddy cop movie - once again highlighting women in a traditionally male sort of story.

He has been at it again in 2015 with Spy, once again featuring Melissa McCarthy - this time as a CIA analyst forced to head undercover when the identities of the front-line agents are exposed. While it doesn't quite reach the heights of Bridesmaids, it does feel stronger than The Heat - and I liked The Heat a hell of a lot. So basically this is a really funny movie comedy.

McCarthy plays Susan Cooper, a skilled CIA analyst who spends her career providing up-to-the-minute strategic advice to field agent Bradley Fine (Jude Law). She is clearly head-over-heels in love with Fine, who seems to take her assistance for granted. When his latest mission - tracking down criminal heiress Rayna Boyanov (Rose Byrne) - ends both with his death and the revelation that the entire CIA field team has been exposed by a double agent, Cooper is sent undercover to Paris to track down Rayna's contacts and prevent the sale of a nuclear weapon to a terrorist organisation.

The great thing about Cooper is that despite her inexperience and build (McCarthy is not a particularly fit woman) she is clearly a talented and intelligent operative. She struggles, sure, and her panicky race around Europe is a source of much of the film's early comedy, but she is a character with dignity and integrity. We laugh at her misfortune as we would the protagonist in any comedy, but we don't laugh at her. She is also supported by a range of strong female characters, played by the likes of the aforementioned Byrne, West Wing alumnus Alison Janney, and British comedy star Miranda Hart. They are all fabulous in their roles. I really hope Hart gets some Hollywood success out of this: I've been a fan for some time, and she deserves those kinds of pay cheques.

Similarly funny is Jason Statham. He plays an English secret agent working for the CIA - this is never explained, nor really did it need to be - who cannot let go of being retired from the field in favour of Cooper. He sneaks around the film in a petulant fit, like a resentful mens rights activist, torpedoing his own reputation as an action movie 'hard man' with reckless abandon. It's a wonderful performance, both funny as well as beautifully self-deprecating.

This is not a perfect film, or an all-time classic, but it's a tightly edited, fast-paced action comedy that hits all of the right beats, does something progressive and admirable, and gets out while the audience is still sniggering. Really that's all I ever ask for from a Hollywood comedy. Feig and McCarthy are back for a fourth run in 2016 with their reboot of Ghostbusters. I can't wait to see it.
Posted by Grant at 6:49 PM