Star Trek: The Next Generation: "Clues" 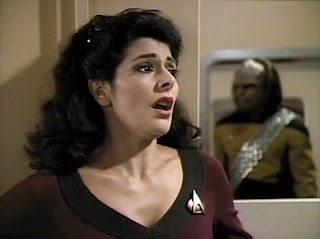 The Enterprise slips through a small and unstable wormhole, knocking out the entire crew for 30 seconds. As they attempt to continue their mission, small inconsistencies begin to appear. Dr Crusher (Gates McFadden) finds her botanic experiments have grown without explanation. Lieutenant Worf (Michael Dorn) discovers he has a recently broken wrist. There is evidence that someone has tampered with the ship's internal clock. All indications point to Commander Data (Brent Spiner). Has there been an entire day erased from the crew's memory? Why won't he explain what has happened?

How much one appreciates "Clues", a Next Generation episode first broadcast in February 1991, potentially depends upon whether or not one has already seen "Thanks for the Memory", a Red Dwarf episode broadcast all the way back in September 1988. The two episodes share a premise and a narrative gimmick: the crew wake up without any memory of the preceding day, become paranoid and - through their panicked investigations - discover the very good reason why their memories were erased. This isn't a suggestion that one episode plagiarised another, but the similarities are overwhelming. While "Clues" is a solid episode, it simply doesn't do the premise justice to the degree that Red Dwarf managed.

It's really a pity that The Next Generation came late to the concept, because once that mystery is stripped away there's not a huge amount in this episode to really make it stand out. The characters mostly act in very two-dimensional ways, and the dialogue is really clunky. Worst-served is Marina Sirtis as Deanna Troi, who has to go through some imaginable trauma from getting a weird sensation from seeing her reflection in the mirror. The scene as presented just makes her character look weak.

The episode's saving grace is Brent Spiner, who plays Data in a remarkably calm and ominous fashion. It becomes clear early on that he is hiding something, but like his colleagues we can't imagine Data engaging in acting deception. When it becomes clear that he's hiding the truth, he effectively comes out and admits it - yet calmly refuses to explain what is going on, even at the risk of a court martial. A key scene late in the episode drops him into a room with Captain Picard, and it's television gold: two great characters having a serious conversation rather than all of the forced little mysteries and panic attacks.

The episode's climax, in which an alien intelligence takes over Troi's body, feels somewhat rushed, and betrays this episode's purpose as a cost-saving "bottle show". Then again, once the mystery of the missing day is solved, what else is there to show? A more complex story might have benefited from splitting the episode more evenly between the present time and the flashback, but here it's simply not an option with what they have. You can tell they're short on material: the episode drags in Guinan (Whoopi Goldberg) prior to the opening credits for a brief holodeck adventure in Picard's Dixon Hill game. While kind of amusing its only relevance to the episode at large is Picard's open enthusiasm for following clues.

This all makes "Clues" a rather difficult episode to judge. Seen the first time, and potentially not recognising its similarity to another prominent SF episode, it certainly feels like a rather clever story. With familiarity, however, there's time for a little contempt. The poor dialogue becomes more obvious and the episode feels less entertaining. In the end it does qualify as "good" on a binary scale, but only barely. It's worth watching once, and then doesn't really need to be seen ever again. We're 14 episodes into Season 4 and 10 of them have been good: the quality ratio bounces back up to 71 per cent.
Posted by Grant at 8:58 PM