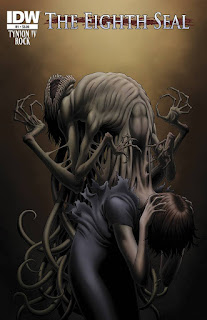 James Tynion IV seems to be tremendously active these days, writing comics not just for DC Comics but also Boom Studios and now IDW as well. His latest book, The Eighth Seal, is a new horror title featuring artwork by Jeremy Rock and colours by Nolan Woodward. The book follows Amelia, a woman suffering from horrific visions of monsters and inhuman violence. She may even be a monster herself. She's also the First Lady of the United States of America.

It's an intriguing concept, but it doesn't work too well in execution. The first problem is that not a great deal happens in this issue. We're introduced to Amelia, and her visions, and some of the supporting characters around her. There's not really a strong hook to make us keep reading. She's having visions, but there's no indication of what they mean or if they're likely to be dangerous. The pages are laid out with fairly large, sparse panels that don't let a lot of plot into them.

The idea of blending some sort of supernatural or psychological horror with the realistic political process of The West Wing has potential, but it would need a much stronger and more deeply researched work than this. The White House scenes feel superficial and cursory. I've thought for some time that you could do a very effective political drama in comic book form, but this simply isn't going to be it. Horror fans desperate for some new comics might want to check it out, but for everyone else this seems easily skipped. (2/5)

Under the cut: reviews of Back to the Future, Ninjak and Star Trek/Green Lantern.

Back to the Future #3

I'm just not convinced a Back to the Future comic book works. This miniseries (which is about to become an ongoing, apparently), which has been co-written by film trilogy co-creator Bob Gale, throws in little vignettes and short stories in between the events of the movies. In this case it's a short trip to the Jurassic age for Old Biff and a love-fixing mission for Doc when the Lorraine and George of 1960 begin to fall out of love. The art is engaging and captures the energy of the films well, but they just feel very inconsequential and more than a little silly. Some decent talent is involved, but at the conceptual level it just doesn't work for me. (2/5)

A new story arc kicks in for Ninjak here, so if you've waiting waiting for a jumping-on point this is your chance. A British government prisoner is busted out by a massive yellow man with a magical hammer, and the elite spy Ninjak is dispatched to investigate. Doug Braithwaite has the kind of art that feels like it should be headlining one of DC or Marvel's big crossover events - it's a real coup for Valiant to keep him around. Matt Kindt's script cleverly throws this action-oriented masked hero into an adventure that's more akin to a DC Vertigo urban fantasy than a superhero book. It's surprising, but works beautifully. (4/5)

Before I write anything else, I just wanted to give a round of applause to Cat Stagg's sensational alternate cover (pictured here) that riffs on the original Star Trek: The Motion Picture poster. As for the comic itself, which rounds off the miniseries with this issue? Well it wraps things up with a big superhero fight, which doesn't feel particularly like Star Trek and is - to be honest - fairly weak when it's relied on in the Green Lantern comic. This has been a pretty underwhelming series, one that's tried to shoe-horn in too much mythology from each franchise to have a real chance of working. If they try something like this again, I hope they pull back a little and give us less fan references and more story. (2/5)
Posted by Grant at 8:18 AM